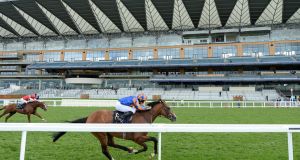 Aidan O’Brien had no challenger to Stradivarius in Thursday’s Ascot Gold Cup but may have uncovered a likely contender for the Stayers crown in 2021 with Santiago.

The 100-30 shot impressively won Friday’s Queen’s Vase to give O’Brien a fourth winner this week, putting him on 74 Royal Ascot winners in total, third on the all-time list and just one behind the late Henry Cecil.

“We thought he was going to be an ideal Leger horse. We’ll give him another run somewhere between now and then,” O’Brien said.

“We’ll see what the lads (owners) want to do but he’d be a horse you’d like to take your time with him. He could be a Cup horse next year so we’ll keep that a little bit in our mind,” he added.

It was a seventh Queen’s Vase for the Irish trainer and Santiago is a 10-1 shot to emulate the 2013 and 2018 winners, Leading Light and Kew Gardens, who went on to Classic success at Doncaster.

O’Brien’s 2019 Derby hero Anthony Van Dyck was a slightly unlucky fifth in the Hardwicke Stakes after failing to get a clear run in the straight.

It was Fanny Logan who put the Irishman’s great rival John Gosden one ahead for the week with a sweeping run down the outside. The only filly in the race was a 70th Royal Ascot winner for Frankie Dettori.

The 30-year-old from Kinsale in Co Cork did it in style too as the Karl Burke-trained two-year-old ran away from her opposition to the tune of six lengths from the favourite Setarhe.

Curtis, who shared the 2010 Irish apprentice title with Joseph O’Brien and Gary Carroll, tops the jockeys standings in Britain with 85 winners in 2020.

The importance of a prestige success like this wasn’t lost on him however.

“I had two things at the top of my agenda. One was to ride a Group One winner and I’m still looking for that. The other was to ride a Royal Ascot winner and that is one off the list,” he said.

“Every jockey would like to have a stab at being champion, and being able to hold that title, so if I ever get in a position to for the title I would give it 120 per cent,” Curtis added.

Hollie Doyle also secured a milestone first success at the meeting as the 33-1 outsider Scarlet Dragon landed the concluding Duke Of Edinburgh Stakes.

The Englishwoman is just the third female jockey to ride a Royal Ascot winner alongside Hayley Turner and Gaye Kellaway.

“This means a huge amount to me. You walk into Ascot every year with really high hopes and try to picture it in your head what it’s like to ride a winner here but it’s very hard to come across winners as I’ve learned. This is amazing for me,” said the 23-year-old jockey.