Classic opportunity for racing to sell itself as the cameras roll

Friday evening’s 2,000 Guineas will be broadcast live on RTÉ2 and ITV4 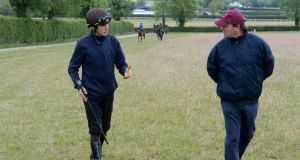 Jockey Ronan Whelan and trainer Michael Halford will be looking to land their first Classic with Sinawann in Friday evening’s 2,000 Guineas at the Curragh. Photograph: Alan Betson

With the sporting stage to itself, Friday’s Tattersalls Irish 2,000 Guineas, and other big races over the coming weeks, have been described as a “huge opportunity” for racing to sell itself.

The opening Irish Classic of 2020 is 20 days late, features a ‘domestic only’ field, and takes place behind closed doors due to the coronavirus pandemic.

Having endured a controversial first season last year, the new Curragh will have no racegoers this time. But the Covid-19 emergency has presented Irish racing with a rare chance to engage a massive terrestrial television audience.

Five races from the Curragh are included in ITV4’s racing coverage from 4.30 to 7.0 which will include the big race at 6.40.

RTÉ2 will cover from 6.0 to 8.0 in the first sign of increased coverage of the sport by the national broadcaster which will include new hour-long evening programmes every Friday, Saturday and Sunday up to mid-July.

Irish racing resumed behind closed on Monday and the Curragh action over Friday and Saturday will test if the sport can get a TV audience ‘bounce’ from being the only show in town.

RTÉ’s Guineas coverage usually tends to attract figures in the region of 200,000. However, McBennett said audience levels are not the priority when it comes to the station’s increased coverage in the coming weeks.

“Racing audiences fluctuate but are consistently measured in six figure numbers. So we will be hopeful that will continue.

“But our primary motivation in doing this isn’t audience figures per se, while we’re obviously cognisant of them: it is the ability to get live sport back on television and to allow people who’ve been starved of live sport the opportunity to engage,” he said.

McBennett described RTÉ’s increased coverage as “a short-term commitment” and said that future coverage, including the one-hour magazine type evening programmes, will combine studio based panels as well as some personnel at tracks.

Aidan O’Brien has six of the 11 runners as he pursues a 12th win in the race against rivals who’ve never before trained the winner. That includes veteran trainer Jim Bolger, who at 78 isn’t allowed go racing under HRI protocols, and relies here on the outsider Fiscal Rules.

The likely favourite is the only unbeaten runner, and sole proven Group One winner, Siskin, who will try to give the Ger Lyons-Colin Keane team a first ever Classic success.

The only blot on Siskin’s copybook came when being withdrawn from the start of the Middle Park Stakes last year after getting upset in the stalls.

“Nothing has come to light as to why he did what he did,” said a spokesman for Siskin’s owner. “He has been through the stalls plenty of times since without a bother so he should be fine.”

Untested beyond six furlongs, an unsettled weather outlook might not be ideal in terms of Siskin’s stamina. The same could apply to the apparent Ballydoyle No 1 Lope Y Fernandez.

In unique circumstances then the unexposed Sinawann may be value to give Michael Halford and Ronan Whelan their own first Classic.

It would also give owner, the Aga Khan, a first Irish Guineas victory of any kind, and in front of the deserted stand named after him.