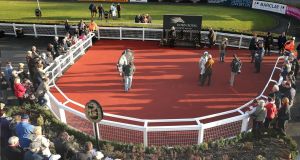 Down Royal: was voted Irish Racecourse of the Year in 2017. Now now under new management, on Tuesday it is scheduled to host the first of a dozen fixtures this year. Photograph: Kevin Boyes/Presseye/Inpho

A new chapter in the over 200-year history of Down Royal racecourse could begin on Tuesday when the track’s new management offer free admission to patrons for its opening fixture of 2019.

First of all, however, it will have to pass an 8am precautionary inspection due to the threat of potential snowfall overnight.

The Dublin-based Merrion Property Group, headed by businessman Michael Roden, took over management of the track at the start of the year.

That took place after a lengthy and sometimes controversial transfer from the previous tenants, the Down Royal Corporation of Horse Breeders.

At one point the future of racing at one of the two tracks in the North of Ireland appeared to be under threat.

However Merrion Property has pledged its commitment to continue racing on the 300 acre site it bought in 2005 and last month a deal was struck to ensure a smooth transfer of fixtures and fittings, as well as branding, after negotiations facilitated by Horse Racing Ireland.

Tuesday is the first of a dozen fixtures this year at Down Royal which was voted Irish racing’s Racecourse of the Year in 2017.

Should racing get the go-ahead, the track’s new chief executive has confirmed there will be free admission for racegoers.

“We have had well over 1,000 e-tickets downloaded already and we can give assurance that the gates are open and people can pass through without any money changing hands.

“It’s hard to quantify how big the attendance will be but we hope this will be a more buoyant meeting than in the past,” said Emma Meehan on Monday.

She added that racegoers won’t notice any changes on the back of the change in management team.

“All aspects in terms of supplying and security and general operations are a carbon copy of what was there before. There will be new faces in terms of management but it’s very much a case of ‘as before’,” Meehan added.

A total of 80 declarations line up in the seven races and they include the venerable 16-year-old, See Double You, who could go one better than his recent Fairyhouse second in the first of the handicap chases.

Willie Mullins sends three north and all look to hold decent claims including the Galway Festival third Golden Spread who could appreciate better going in the bumper.

However it is Leopardstown’s ground, and the weather outlook which could impact upon it, which is preoccupying Mullins and other leading trainers ahead of this weekend’s Dublin Racing Festival.

Officials at the Dublin track issued a going report on Monday with the chase course officially described as “good” and the hurdles course a slightly easier “good to yielding”.

For trainers eager to get softer conditions at the €1.8 million showpiece, which features eight Grade One races over Saturday and Sunday, there appears to be a rather double-edged weather outlook.

Up to 20mls of precipitation is forecast on Thursday and some of that could fall as snow. It will remain cold for the week too with temperatures getting as low as minus two at night.

Leopardstown’s chief executive Pat Keogh said he had no concerns at this stage about racing going ahead as scheduled.

“Between ten and 20mls of rain is forecast on Thursday and we are told it could come as rain, sleet or bits of snow. But it’s very early, it’s coming from the west, and God only knows what will come this way,” he said.

Even with up to 20 mls forecast, any change in the going at Leopardstown is expected to be marginal which may prove crucial to some weekend running plans.

“Monalee is in good form but would not run if we had the same ground we had at Christmas,” he reported. “Balko Des Flos was really sore after Christmas and he’d want to have an ease in it before we’d run him.”

Road To Respect is currently ante-post favourite for the most valuable event of the weekend and his trainer Noel Meade said: “He did a nice bit of work around Fairyhouse [on Saturday] and is on course for Leopardstown although I wouldn’t mind seeing a bit of rain.”