Honeysuckle has six lengths to spare on field at Fairyhouse 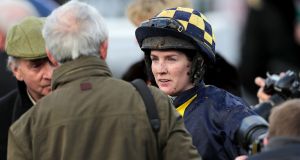 Honeysuckle maintained her unbeaten record with a facile victory in the BetVictor Solerina Mares Novice Hurdle at Fairyhouse.

Bought for €110,000 after winning a point-to-point last spring, the daughter of Sulamani made an impressive debut for Henry de Bromhead in a maiden hurdle at this track in November before following up in Listed company at Thurles the following month.

She was the 6-4 favourite stepping up to Grade Three level and her supporters will have had few worries for the duration of the two-and-a-quarter-mile contest.

Rachael Blackmore positioned Honeysuckle in behind the pacesetting Western Victory for much of the way before allowing her to stride on rounding the home turn.

“I thought she jumped well. Rachael didn’t think she jumped as well as her last couple of runs, but I was happy.

“I’m delighted with her, she’s a lovely mare and we’re very lucky to have her.”

Paddy Power make Honeysuckle their 7-2 favourite for the Trull House Stud Mares’ Novices’ Hurdle at the Cheltenham Festival in March.

De Bromhead added: “I’ll speak to the guys, but I wouldn’t think she’d have another run before Cheltenham.

“We’ll enter in the mares’ novice hurdle, obviously, and I’ll see what else we might enter in as I just have a thing that she’ll possibly be better over further.

“The mares’ [race] is two-mile-one and she’s won over that kind of trip, but I’ll speak to the owners and see what they want to do.

“She’ll probably be entered for that and probably the Ballymore [Novices’ Hurdle] as well.”