Presenting Percy picks up where he left off at Gowran Park 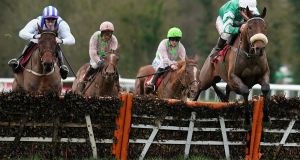 The favourite for the Cheltenham Gold Cup doesn’t often get to fill the role of popular underdog too but Presenting Percy looks a singular horse judged on his winning comeback at Gowran on Thursday.

Overcoming a 316-day absence, Presenting Percy landed the John Mulhern Galmoy Hurdle for a second year running and was immediately cut to as low as 11-4 for the Gold Cup in March.

Unseasonably quick ground had delayed the reappearance of last season’s RSA winner. However absence appeared to have made a lot of hearts grow only fonder as the 9-4 winning favourite got a notably warm reception from a large crowd afterwards.

Since Presenting Percy is owned by the wealthy businessman Philip Reynolds, a son of the former Taoiseach, Albert Reynolds, and is trained by Pat Kelly, whose relationship with the media is famously wary, he makes for an unlikely underdog story.

But at a time when elite National Hunt racing is dominated by billionaire owners like Michael O’Leary and JP McManus, and Willie Mullins and Gordon Elliott are overwhelmingly dominant as trainers, the Irish racing public appear to have warmed to the eight-year-old star.

That he has already won twice at the Cheltenham Festival no doubt helps too, as does the versatility he once again showed in landing the Galmoy. Travelling notably well throughout, jockey Davy Russell sent him to the front before the last and a trio of Mullins horses never looked like getting close.

“He gave me a good feel all the way through and we’re very happy. He got a round of applause coming back into the winners enclosure and he nearly got one on the way out to the track beforehand – that’s the beauty of jump racing,” Russell said.

Characteristically, Athenry, Co Galway-based Kelly, preferred to maintain a low profile afterwards and it was Reynolds who took the spotlight – “Pat doesn’t say an awful lot. He leaves that to me and I’m not sure I do a great job!

“Pat has always said he’s one of the most special horses he’s ever seen, let alone trained. With every day that passes I’m beginning to believe him a little more.”

The owner indicated a return to Gowran next month for the Red Mills Chase will be the final stop on Presenting Percy’s route to the Gold Cup.

“People have taken to this horse and with that comes a lot of excitement and a lot of pressure,” Reynolds added. “We’ve been trying to look after this horse to give him every chance to get him to the big day, where we all know we want to be, in March.”

Willie Mullins was out of luck in the Galmoy but later secured a seventh Goffs Thyestes Chase success when the 4-1 favourite Invitation Only landed the prestigious €100,000 handicap.

Ruby Walsh guided the novice to success over the gallant 25-1 outsider Alpha Des Obeaux with another Mullins runner, Up For Review, in third.

Invitation Only could yet wind up clashing with Presenting Percy in the Gold Cup as Mullins reported: “To win a race like this off a big weight means he’s a fairly decent horse. The Gold Cup and Grand National will be options for him.”

Invitation Only had his Gold Cup odds halved to 25-1 on the back of his victory on Thursday.