Irish racing stepping up plans for a no-deal Brexit 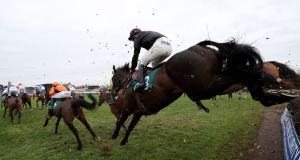 “Even in the event of a no-deal exit we would hope Ireland will still be dealt with as a single unit for animal disease purposes,” said HRI’s Brian Kavanagh. Photograph: David Davies/PA

Irish racing’s efforts to prepare for a potentially disastrous no-deal Brexit are gathering pace although the sector is currently a “prisoner of the macro-politics” according to one leading official.

Co-operation between Europe’s three leading racing and breeding jurisdictions is ongoing as fears increase that Britain could crash out of the European Union without a deal on March 29th.

That would see an end to the Tripartite agreement that assures freedom of movement for horses between the three countries with huge implications for Ireland’s racing and bloodstock sectors.

Fears of travel restrictions, long delays at customs checks and potential tariffs on some thoroughbreds have been widely expressed in the event of the Tripartite agreement ceasing to apply.

“In the event of Britain crashing out without a deal it would be recognised as a third country and the EU requires movement from third countries to go through border inspection posts,” Brian Kavanagh said on Monday.

Ireland currently has only two such border inspection posts at Dublin and Shannon airports.  However the HRI boss indicated a new BIP at Dublin port will be ready in time by March 29th to allow horseboxes crossing the Irish Sea by ferry to be inspected if such steps are required.

Other BIPs could ultimately be established in the longer term – for instance at Rosslare Harbour – although racing officials are keeping fingers crossed that a political deal can ultimately be found at Westminster to make such a step unnecessary.

“Until that resolves itself we’re prisoners of the macro-politics. Hopefully a plan B can be found in the House of Commons and we can get a clearer picture by next week.

“But even at that stage you’re almost 50 days from the exit so the time to devise alternative arrangements, and put them in place is limited,” Kavanagh said.

The HRI boss feels that co-operation between the racing authorities in Ireland, France and the UK means freedom of movement for thoroughbreds won’t be affected should be a transition deal be eventually negotiated.

“A lot of this relies on alignment of regulatory standards and you would be happy to make a case that veterinary and traceability standards in the three countries equate to each to each other. We’re starting from a good place,” he said.

“If the Article 50 deadline is extended beyond March 29th, and they go into a transition period, then the status quo will prevail until the end of 2020.

“In the various scenarios other than a no deal, I do believe we’re okay because there is provision for a transition period,” he added.

However when Kavanagh meets with his counterparts this week the focus will be on steps that may be required if a political solution isn’t found.

“There are a number of complicating factors that need to be worked out such as border inspection posts and what happens at those.

“Will there be full veterinary checks? I would say that’s probably not necessary but it’s not for me to say. That’s ultimately for the EU and the chief veterinary officer in the Department of Agriculture.

“Will there be identification checks? That’s not too difficult for us given the passport and registration systems in place.

“Will there be tariffs that need to be imposed and paid? It depends on whether it is WTO terms and that would imply tariffs of 13.5 per cent on non-breeding stock such as geldings.

“And the last thing is what requirements the customs authorities will have? That’s works we need to do in the course of the coming weeks with the authorities here as the prospect of a no-deal exits becomes more likely,” he said.

Kavanagh admitted the impact of a no-deal Brexit in relation to the North of Ireland is “the great unknown” for racing here.

“Even in the event of a no-deal exit we would hope Ireland will still be dealt with as a single unit for animal disease purposes,” he said. “But there is the question of movement of horses across the border which is effectively movement in and out of the EU.”