Meath jockey adds to winning haul with Espoir D’allen at Naas to make it 1,876 triumphs 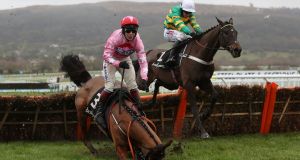 There isn’t much Barry Geraghty hasn’t achieved during his remarkable career although a first winner at the Dublin Racing Festival will be in his sights next weekend.

On Saturday Geraghty became the fourth most successful jockey in jump racing history when riding winner number 1,875 of his career in Ireland and Britain.

That saw him pass out the legendary Richard Dunwoody and Geraghty didn’t waste any time reaching 1,876 when Espoir D’allen entered Champion Hurdle calculations with a smooth victory at Naas a day later.

The 4-9 favourite had over two lengths in hand of Wicklow Brave at the end of the Limestone Lad Hurdle.

However his championship ambitions at Cheltenham have to be taken in the context of how the dual-title holder Buveur D’air – also owned by JP McManus – – is favourite to complete a Champion Hurdle hat-trick in just over six weeks time.

Geraghty is set to team up with Buveur D’Air at Sandown on Saturday which means he will miss the first day of the second renewal of the €1.8 million Dublin Racing Festival at Leopardstown.

He will be there for the Sunday action though and could make up for missing out on a winner last year on some of the McManus team which potentially includes Anibale Fly in the €225,000 Unibet Irish Gold Cup.

However running plans for many of racing’s big operations won’t be finalised until likely ground conditions at Leopardstown become more clear.

But on a cold day at Naas, satisfaction at his latest milestone, and passing out a childhood hero in Dunwoody, was keeping Geraghty warm.

“It’s a good scalp to take!” he grinned. “Even when I was starting out, and sitting beside him in the weigh-room, Richard was still the prince. As a kid, growing up watching him, he was God. And he still has that aura. No one has ever sat on a horse better.”

McCoy is retired but Johnson is still going strong at 42 while Walsh and Geraghty will both reach 40 this year. The latter insists he is enjoying his job more than ever.

“There’s a buzz in riding winners. But there’s still a buzz in going out there, whether it’s here or at Cheltenham, and jumping at speed. I’m doing it now for 23 years and I still get that buzz. We’re all adrenalin junkies,” he said.

Espoir D’allen was cut to 16-1 for the Champion Hurdle after his seventh hurdles success and Geraghty added: “He was giving 7lbs to reasonable opposition and did it nicely. The division he’s in now is the Champion and if Buveur D’Air wasn’t there he’d be a nice ride.”

An important forfeit stage for the Dublin Racing Festival will take place on Tuesday and ground conditions at Leopardstown are at least expected to be easier than they were during the Christmas festival.

“I would anticipate the going will be a little more comfortable for big horses than Christmas,” said Leopardstown’s clerk of the course, Lorcan Wyer, on Sunday.

“It’s going to get cooler this week and with good bit of rain. We could get 10 or 12mls of rain on Thursday which will please a lot of people,” he added.

It will certainly please Willie Mullins who has a large entry for eight Grade One races in particular at Leopardstown.

More evidence that a rare dip in the champion trainer’s strike rate looks to be behind him came at the weekend with a double at Fairyhouse on Saturday and an impressive big race success for Ballyward a day later.

Narrowly beaten on his chasing debut Ballyward had no difficulty making the leap to Grade Three standard under Ruby Walsh.

“I’m delighted considering it was just his second run. Whether we give him another run over a shorter trip for experience before Cheltenham I’m not sure. I’d imagine the race will be the race for him,” Mullins said.

Ballyward was cut to 14-1 for the RSA with one firm but is as low as 8-1 for the four-mile National Hunt Chase as well.

Rachael Blackmore ride her 74th winner of a landmark season on board the 8-1 shot Poker Party who landed the novice handicap chase.

Poker Party’s trainer Henry De Bromhead is likely to have a large Dublin Racing Festival team which is set to include Petit Mouchoir in the BHP Irish Champion Hurdle.