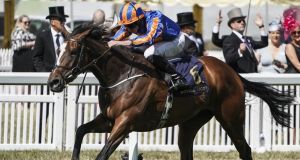 Aidan O’Brien will make an early start to his 2019 campaign when the Royal Ascot winner Magic Wand lines up for a mammoth $7 million prize in Miami on Saturday night.

Magic Wand takes her chance in the inaugural Grade One Pegasus World Cup Turf Invitational at Gulfstream Park.The Irish star faces nine opponents in a race due off at 9.51pm Irish-time and covered on the Sky Racing channel.

Ireland’s champion trainer had a runner at last month’s Hong Kong International Carnival, but is making an early-season top-flight tilt without even having had a winter runner at Dundalk yet this year.

His actual first starter of the new year will be Hunting Horn (Lordan) who will line up in the Grade Three $200,000 WL McKnight Stakes over a mile and a half on the Gulfstream undercard at 9.14pm.

Ballydoyle’s principal focus though is on the big turf event introduced as main support to the third running of the $9 million Pegasus World Cup due off at 10.36pm.

The value of the big dirt highlight has dropped from $16 million last year, when won by Gun Runner, with the balance going to the new grass race.

Magic Wand has twice finished runner-up at Group One level in the Prix Vermeille and the Prix de l’Opera. Local forecasts make her an 11-2 shot behind Yoshida at 3-1 and Aerolithe at 4-1.

She is drawn in stall one and while victory would be a maiden top-flight success for Magic Wand it would be a 25th US Grade One for her trainer.

Drogheda in the driving seat as Division One reaches a thrilling finale 06:00
Regionalisation may be the key as league adjusts to new reality 06:32
Damien Comer to miss another Connacht championship following hamstring injury 06:00
Ireland's centre will hold thanks to Henshaw and Aki’s midfield muscle memory 06:00
Gerry Thornley: Antoine Dupont and France look perfectly primed for Ireland visit 06:00
Here is your handy guide to sport on television this week