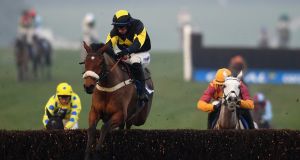 Elegant Escape: the Welsh National winner goes in the Cotswold Chase at Cheltenham and could prove a real threat to Presenting Percy in the Gold Cup in March. Photograph: Harry Trump/Getty

Cheltenham has its ‘Trials Day’ on Saturday and there is similar ‘prelude’ feel about much of Ireland’s weekend action ahead of next week’s €1.8 million Dublin Racing Festival.

Even that lucrative Leopardstown action will get viewed through the Cheltenham prism so the shadow of jump racing’s greatest festival is looming ever larger with just over six weeks to go.

This Saturday’s Fairyhouse feature, the BetVictor Solerina Novice Hurdle, was won last year by Laurina who went to land the mares’ novice hurdle at Cheltenham in style.

Laurina’s stable companion Robin de Carlow is a 10-1 shot to win the same race at Cheltenham, a couple of points ahead of one of her Saturday rivals, Honeysuckle. However a 5lb pull at the weights could see those ante-post positions reversed and help Honeysuckle maintain her unbeaten status.

Joseph O’Brien sends two horses, including the Cork winner Fakir d’Oudairies, to Cheltenham for Saturday’s opener there and he will also be doubly represented in Sunday’s Naas feature.

Both are owned by JP McManus although if the Grade Three event is to provide festival clues they could most likely come through Chris’s Dream.

Henry de Bromhead’s runner impressively won his chasing debut at Navan last month but a step up to three miles should suit him perfectly judged by his hurdles form last season.

Michael O’Leary’s Gigginstown Stud team have three in the race including Champagne Classic, famously described by the Ryanair boss as the worst horse he owned after winning at the 2017 Cheltenham festival.

Forecast rain will help Champagne Classic on his comeback after a leg injury but this race may see Chris’s Dream win well enough to see 25-1 odds about him for the RSA shrink significantly.

Espoir d’Allen is already as low as 16-1 for the Champion Hurdle and will attempt to cement his place in the line-up by landing the Grade Three Limestone Lad Hurdle.

The youngest horse in the race has to concede weight all-round but Gavin Cromwell’s runner continues to impress as notably progressive.

Tombstone is Gordon Elliott’s hope in the race and the trainer said on Friday: “At the weights he doesn’t look badly treated although I’d say Gavin’s horse will be hard to beat.”

With Presenting Percy having cemented his status as Gold Cup favourite at Gowran on Thursday, back at Cheltenham the Cotswold Chase sees two more leading ‘Blue Riband’ contenders, Frodon and Elegant Escape, take each other on.

Should Elegant Escape progress again from his Welsh National victory he could become one of the leading rivals to the Irish star in March.

In other news a Referrals Committee panel has dismissed an appeal by amateur jockey Aubrey McMahon against a five-day ban he picked up under ‘Non-Trier’ rules at Tramore on New Year’s Day.

McMahon rode the Ted Walsh-trained Batcio in a maiden hurdle after which the horse was suspended from racing for 42 days. The stewards penalised the 20-year-old rider after taking his inexperience into consideration.

A referrals committee panel chaired by retired Supreme Court judge Joseph Finnegan reserved judgement on McMahon’s appeal last week but it was confirmed on Friday that it has been dismissed.