Decision on Aubrey McMahon ‘non-trier’ appeal expected in a week 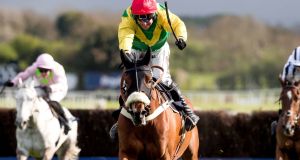 Jockey Robbie Power will try to stop Altior’s winning streak when teaming up with Fox Norton in Ascot’s three-runner Grade One feature on Saturday.

The depleted field means Altior could emulate his former stable companion Sprinter Sacre, the shortest priced Grade One favourite in Britain when winning as a novice at Aintree in 2012 at odds of 1-7.

Nicky Henderson’s two-mile champion may even start shorter for the Matchbook Clarence House Chase which has been bypassed by Willie Mullins’s former triple-winner Un De Sceaux due to quick ground conditions.

That leaves Fox Norton as Altior’s most likely danger despite returning from over a year off due to injury. Altior has won his last 16 races. Victory on Saturday will take him within one of the former Stayers Hurdle champion, Big Bucks.

Power has five rides in total at Ascot including Jessica Harrington’s Magic Of Light who returns to the smaller obstacles in the Grade Two Mares Hurdle. Limerick trainer Charles Byrnes has also booked Power for his Wetherby winner Thosedaysaregone in a later handicap hurdle.

In other news, an Appeals & Referrals Committee panel chaired by the former Supreme Court judge Joseph Finnegan reserved judgment on an appeal by amateur rider Aubrey McMahon against a suspension imposed under “non-trier” rules at Tramore on New Year’s Day.

McMahon’s appeal against a five-day ban for his ride on the Ted Walsh-trained Batcio in a maiden hurdle was heard on Friday. The Tramore stewards imposed the penalty after taking the 20-year-old rider’s inexperience into consideration. The horse was also suspended from racing for 42 days.

After Friday’s hearing a spokesman for the Irish Horseracing Regulatory Authority said the appeals body wants to set out how rules will be applied and also need to deal with some evidential matters in their judgment. A decision is likely within a week.