Altior makes it 12 straight wins with impressive run at Newbury 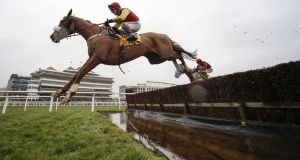 Native River made a successful return from almost a year on the sidelines with an impressive display in the Betfair Denman Chase at Newbury.

Colin Tizzard’s charge won the Hennessy Gold Cup, the Welsh Grand National and this Grade Two prize last season and despite having been off the track since finishing third in the Cheltenham Gold Cup last March, he was a well-backed 8-11 favourite for his belated comeback.

The eight-year-old soon adopted his customary pacesetting role in the hands of champion jockey Richard Johnson, with his two opponents Saphir Du Rheu and Cloudy Dream content to bide their time.

Johnson began to wind up the gallop on leaving the back straight and the race-fit Cloudy Dream loomed up looking a big threat after straightening up for home.

His effort was short-lived, however, and Native River’s superior stamina shone through between the final two fences as he powered clear to score in comfortable style.

Cloudy Dream was second, with Saphir Du Rheu last of the three on his first start since falling in the Grand National last April.

Johnson told ITV Racing: “It was the perfect comeback for him. It was only a small injury he had, but the owners were fantastic and the Tizzards have given him a nice, slow comeback.

“It was a bit of a cat-and-mouse race today and I’m sure the other two lads were thinking they’d have a go at me after two out. I wanted to try to get a bit of company going to four out, and when they didn’t come I thought I’d wind it up from three out and to be fair to him, he’s really picked up.

“He idled a bit in the last 100 yards, but for a comeback run it was a perfect.”

Looking forward to a second bid for Gold Cup glory, the jockey added: “He feels every bit as good as he did last year. I think if he can produce last year’s run in the Gold Cup, that puts him bang there.

“He was only beaten just over two lengths in it last year and the Gold Cup looks very open this year.

“You’ve got to think he’s got a fantastic chance.”

Tizzard told Racing UK: “Absolute relief. We all saw what he can do last year. You can’t ask for any more really.

“It was an ideal prep for the Gold Cup and as long as he’s okay in the next 10 days, the dream is still alive.

“When they turned to the cross-fence the two greys were travelling very well, but he’s a good jumper and when Richard asked he went away almost effortlessly. He’s such a good horse.

“I’m sure he’ll improve, it’s race fitness isn’t it? The cards were dealt for us when he had ligament trouble. This was always going to be his first race.

“We were getting a bit jumpy when the frost was forecast as we needed this race before the Gold Cup.”

Altior showed he has lost none of his brilliant ability with a comfortable comeback victory in the Betfair Exchange Chase at Newbury.

Unbeaten in 11 previous starts over jumps and a dual Cheltenham Festival winner having landed the Supreme Novices’ Hurdle and the Arkle Trophy in the last two seasons, Nicky Henderson’s stable star was making a belated start to the campaign after undergoing a wind operation.

Despite his absence, he was the 1-3 favourite to claim a Grade Two contest, better known as the Game Spirit, for the second successive year and those who took the cramped odds will have had few concerns for the duration of the extended two-mile journey.

The Paul Nicholls-trained Politologue, the star of the division this season in Altior’s absence after landing the Haldon Gold Cup, Tingle Creek and the Desert Orchid Chase, was soon bowling along in front, with Nico de Boinville happy to sit in behind aboard Altior.

Politologue’s rider Sam Twiston-Davies did his best to run the finish out of his main rival, kicking for home from the final bend, but Altior’s class shone through in the end as he coasted by after the final fence to score readily.

Politologue was a clear second, while Valdez finished last of the three runners after showing some promise on his first competitive appearance in over three years.

De Boinville told ITV Racing: “He felt fantastic there. That ground would be softer than ideal, but he’s handled it well and I couldn’t hear any noises or anything like that.

“It was a big effort from the yard to get him back for today. It’s probably come a bit earlier than we wanted, so all credit to the guv’nor [Henderson] and Toby Lawes, who rides him every day at home.

“We knew coming in here that he was very fresh and very well and we haven’t been able to do much because the ground has been so frosty this week, but he was very good there.”

Henderson said: “It was going to be tactical and I didn’t know who was going to do what, but that was exactly what we wanted.

“He has got so much pace this horse, I was fairly confident if he could get to the second-last upsides on the bridle, it would be hard for a horse to go with him from there.

“He has to improve a lot. He’s had a nice time. The timing was good, he hasn’t had a hard race, he hasn’t even had his ground and he’s beaten a good horse.

“You’d have to say that was perfection, from my point of view.”

1 Six Nations: Ireland are contenders but England still the team to beat
2 Gary Neville in Qatar an exercise in semi-journalism
3 Mike Catt hopes to have Irish backs purring in Six Nations
4 Owen Doyle: Creeping professionalism of schools rugby a threat to the game
5 In Donegal Michael Murphy is seen, simply, as a godsend
Real news has value SUBSCRIBE