Willie Mullins had no concerns over Yorkhill or Melon before Leopardstown

‘We’re as surprised as anyone. If the authorities think there needs to be an investigation that’s no problem’ 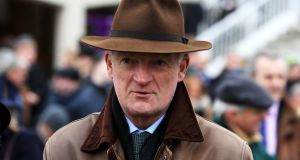 Willie Mullins insists he had no concerns about either Melon or Yorkhill prior to last weekend’s Dublin Racing Festival action at Leopardstown.

The Irish Horseracing Regulatory Board (IHRB) is investigating betting patterns on the two horses who both drifted significantly on the Betfair exchange in the minutes before they ran on Saturday.

Melon finished fifth to Supasundae in the BHP Irish Champion Hurdle and Yorkhill was sixth to his stable companion Min in the Coral Dublin Chase.

On Tuesday Mullins dismissed speculation the two horses might have worked poorly in the week leading up to their races and said if the IHRB investigation uncovers anything he will be delighted to hear it.

“I have really no interest in betting and I didn’t hear any of the betting fraternity say there was anything unusual.

In September of 2016, Mullins, who was not suspected of any wrongdoing, revealed he helped British Horseracing Authority (BHA) officials who were examining suspicious betting patterns in relation to the withdrawal of Faugheen from the Champion Hurdle earlier that year.

In February of 2016 Mullins reported Faugheen, who had been hot favourite for the Cheltenham race, would miss the rest of that season. The BHA reportedly investigated a number of bets against Faugheen placed before that news became public.

Nothing has been made public on the matter since and it appears to have petered out, although a BHA spokesman said on Tuesday that a British racing’s ruling body has a policy of not commenting on whether or not such investigations even take place.

Also on Tuesday Mullins indicated the Champion Hurdle is the likely target for Faugheen who finished runner-up to Supasundae at the weekend. He also said it is “very possible” Yorkhill’s next start will be over hurdles, although he doesn’t have a specific target yet for the enigmatic star.

Mullins revealed a decision on which novice event the exciting Grade One winner Next Destination lines up in at Cheltenham won’t be taken until the week before the festival.

Next Destination holds entries in all three top-flight novice events and is 4-1 for the Ballymore, a race which is the preferred option for Gordon Elliott’s hugely exciting Samcro.

Next Destination is also 5-1 for the three-mile Albert Bartlett Hurdle but a potential Ballymore duel with Samcro, especially in the context of the Mullins-Elliott rivalry, would be one of the most eagerly anticipated clashes of the week.

“Hopefully he stays in one piece and we will decide what to do the week before Cheltenham. When we’re ready we’ll decide what to do. I’m not thinking about anything else except hoping he’s fit and healthy in the morning when I go out,” Mullins said.

The Mullins team has a single runner at Wednesday’s Fairyhouse fixture, which is subject to a 7.30am precautionary inspection. With Paul Townend recuperating after his final fence fall from Killultagh Vic in Sunday’s Irish Gold Cup, it is the trainer’s nephew David who takes the reins on Laureena in a mares’ maiden hurdle.

Gigginstown’s Whistle Dixie has hit the deck on her two starts over fences to date. However her Christmas effort at Limerick was a first run in over a year and this former point-to-point winner could be the answer to the mares Beginners Chase.