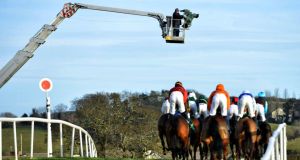 Horse Racing Ireland (HRI) has stressed there is no question of Irish racing playing second-fiddle when coverage of the sport switches to the Racing UK channel (RUK) next year and said that 95 per cent of Irish races will be shown live in full-screen in 2019.

HRI chief executive Brian Kavanagh was speaking after an Association of Irish Racecourses EGM on Tuesday unanimously approved a deal by Sports Information Services (SIS) – which holds Irish racing’s media rights – to switch direct-to-home broadcasting from the At The Races channel to RUK.

The deal has provoked strong criticism with Ryanair boss Michael O’Leary arguing it is bad for the sport here, a threat to competition, and predicting that less people will watch Irish racing when it moves to RUK.

The RUK channel is owned by Racecourse Media Group (RMG), an umbrella body for 37 British racecourses.

However, Kavanagh predicted Irish racing’s profile will be just as good under the new deal. He also acclaimed the merits of a long-term six-year deal until the end of 2023 and said it increased the value of Irish racing’s media rights by 20 per cent compared to 2016.

“There is a strong advantage in having our betting shop rights, our streaming, our direct-to-home and our international sales all aligned with one partner, SIS, and with one set of tracks which is RMG,” he said.

“You have to look at media rights in the round. They cross a lot more platforms than just direct-to-home. Most of the finance in rights sales is to the betting industry and with streaming,” Kavanagh added.

Approximately 85 per cent of the sale of media rights goes to Ireland’s 26 racecourses with the balance going to the semi-state body, HRI. One source has put the value of Irish racing’s media rights at approximately €35 million per year.

Concerns have been expressed about the danger of viewership of Irish racing taking a dip due to RUK being a subscription channel, whereas At The Races is free with a standard digital package. Concern has also been voiced about the rate of live coverage of Irish races on RUK’s busier schedule.

However Kavanagh said: “Based on this year’s fixture list 95 per cent of fixtures will be covered live on full-screen. Five per cent will be split-screen, or what happens at the moment anyway in terms of cutting away to watch the last three furlongs of a race for instance.”

In relation to races being shown behind a ‘red button’ or the possibility of a second RUK channel, Kavanagh added: “All options can be considered going forward but there’s no question of Irish racing being relegated or playing second-fiddle in any way.

“The racing will hold its own anyway in terms of quality and we will work with RMG to make sure broadcast quality is at its maximum.

“This deal goes to the end of 2023. It’s hard to know what the media rights landscape will be like next year, never mind in six, and the key point here is the certainty and security of these rights, contracted with strong partners for six years which is a very important issue for Irish racing.”

The Association of Irish Racecourses (AIR) chief executive Paddy Walsh expressed satisfaction with the deal on Tuesday and said that any race not shown live on RUK will still be accessible by phone, app and other devices.

“As for Michael O’Leary’s comments about competition when we come to do the next deal in 2023, who knows what way the market will be then? We’ve been fortunate in the last couple of deals that there was quite a lot of discord in the market and we were able to capitalise on that. We have to deal with the market at the time,” he said.

In a statement the RMG group said it has no plans to increase the RUK membership fee and that it will broadcast all Irish races in HD for the first time. It also pledged coverage containing detailed previews, analysis and dedicated Irish feature programming.

RMG also confirmed it has added Chelmsford City to its list of racecourses and its chief executive, Richard Fitzgerald, commented: “A package of all Irish racing, Chelmsford City and RMG’s horseracing rights will prove a popular proposition for our streaming bookmaker partners and international broadcast partners worldwide.

“Irish racing fits perfectly into the long-term RMG strategy. We look forward to working closely with HRI, AIR and SIS in showcasing and marketing such a varied and premium product.”