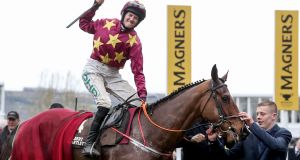 Rachael Blackmore and Minella Indo are set to take another step towards a potentially momentous Cheltenham Gold Cup in March when lining up at Navan on Sunday.

Already as low as 8-1 third favourite for jump racing’s biggest prize, Minella Indo will have just his fifth start over fences in the Grade Two BetVictor Chase.

One thing this latest step in his burgeoning steeplechase career doesn’t promise to be, however, is competitive.

Perhaps his biggest rival will be Ravenhill who is rated almost a stone inferior, yet he has to concede 2lbs to the rising star of the staying chase division.

Anything other than a smooth success for Blackmore’s mount will be a major surprise which makes the €60,000 contest a largely academic exercise for most punters.

Saturday’s Grade Two Poplar Square Chase at Naas has also got just four runners but shapes as much more intriguing.

The trio of Fakir d’Oudairies, Notebook and Cash Back were at the top of the Irish novice tree last season.

It was Fakir that ultimately did best of them at Cheltenham when runner-up to Notebook’s stable companion Put The Kettle On in the Arkle.

Notebook started favourite but could finish only fifth while Cash Back ran free and was beaten when falling two out.

On official figures he emerges on top against his two Grade One-winning opponents but very testing ground could suit Fakir d’Oudairies more en-route towards a possible tilt at the King George over Christmas.

Ferny Hollow’s winning debut over flights at Gowran on Friday heralds the emergence with a vengeance of Willie Mullins’s novice team this weekend.

Appreciate It, runner-up to Ferny Hollow in the Champion Bumper last spring, starts over flights at Cork on Sunday.

That’s after two new bumper winning French recruits, Ganapathi and Grand Bornand, take in a couple of divisions of a four-year-old maiden hurdle there.

Another ex-French four-year-old, Gars En Noir, is put straight into black-type company at Naas on Saturday, lining up in a Grade Two hurdle against the winners Wolf Prince, Call Me Lyreen and Indiana Jones.

Champion jockey Paul Townend will also team up with the mud-loving Stattler in a maiden at Naas, where the highly-promising Cedarwood Road makes his debut over fences for trainer Gearóid O’Loughlin in a beginners’ chase.

In cross-channel action, Cork jockey Maxine O’Sullivan teams up with Co Armagh trainer Ronan McNally when The Jam Man tries to pull off a rare hat-trick in Haydock on Saturday.

The versatile seven-year-old won on the Flat at York last month and subsequently easily won the prestigious Troytown Chase at Navan a fortnight ago.

Now The Jam Man is favourite in some lists to complete a cross-discipline three-timer in a lucrative three-mile handicap hurdle where he will be joined by another Irish raider, Relegate.