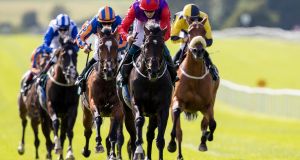 There is an unlikely dash of classic excitement to Dundalk’s mid-November Monday afternoon card when Romanised will warm up for a potential career finale in Hong Kong next month.

Should he come through it impressively then a date at Sha Tin on December 13th in the Longines Mile is on the cards before beginning a stud career in 2021.

Ken Condon’s star has been operating at the highest level throughout his racing career, including as a juvenile when chasing home the subsequent Derby winner Masar in Sandown’s Solaraio Stakes.

He proved his own memorable slice of classic glory was no fluke with a resounding success in the Prix Jacques Le Marois last year, after which he was controversially denied a third Group 1 by the Longchamp stewards in the Prix du Moulin.

A return date in that race a couple of months ago proved an anti-climax, but that was on the sort of soft ground Romanised has never been comfortable on.

A third Group 1 prize could yet come his way on the quick surface at Sha Tin but it is dependent on him impressing on Monday. It will be no “gimme” either against seven opponents.

Romanised’s 117 mark gives him a slight edge on Saltonstall on ratings. However the latter is in the form of his life after winning at Listed level last time, and also has Sam Ewing’s valuable 7lb claim.

Both are tackling the all-weather for a first time, and the presence of Romanised’s stable companion These Days suggests a decent pace is assured.

Considering the Romanised team have half an eye on loftier Far East targets it makes for an intriguing Monday afternoon prospect.

Sovereign has not won since his surprise 33-1 all-the-way success in last year’s Curragh classic, and will drop back in trip to 10 furlongs having finished fifth in the Long Distance Cup at Ascot last month.

Other Irish interest in the valuable race includes the Fozzy Stack-trained Lady Wannabe, while the Japanese star Deirdre is joined by cross-channel stars Desert Encounter, Dark Vision and Lord Glitters.