Gordon Elliott’s Felix Desjy digs in to score at Punchestown 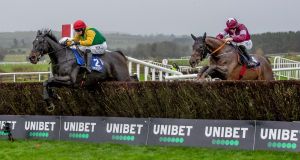 Felix Desjy took his unbeaten fencing record to two with a hard-fought success in the Mongey Communications Novice Chase at Punchestown.

A facile winner on his first run over the bigger obstacles at Killarney, Gordon Elliott’s charge faced a much stiffer test in this Grade Two heat.

However, the Gigginstown House Stud-owned gelding stepped up to the plate in determined fashion after making some of the early running.

Sizing Pottsie set sail for home from the fourth-last fence and had his rivals at full stretch, with Felix Desjy coming out of the pack two out.

Leading on the run-in, Felix Desjy (13-8) pulled away to score by a length and three-quarters in the hands of Jack Kennedy.

Last season’s Champion Hurdle third Darver Star, the 11-10 favourite, was eight lengths back in third, never being able to get into a challenging position.

Kennedy said: “He’s gone very relaxed now which is great because if something comes to take him on he’s not tearing away with you, that’s a great help.

“He put in a great round of jumping and I was delighted with him. He’s deadly over a fence.

“I thought Sizing Pottsie might have got away from me a little bit, but my lad loves that ground and he stays galloping.”

Gavin Cromwell will forward to another day with Darver Star on better ground.

He said: “He’s fine. We’ve always known that he likes a bit of nicer ground. That soft ground made him look slow, I don’t know if he just wasn’t enjoying it.

“On the whole he jumped well enough. Obviously you’d like to be winning there today, but he didn’t run shocking and went to the line well enough.

“We’ll probably look at something over Christmas and he definitely wants a bit of nicer ground. We won’t panic yet.”

Earlier in the day Asterion Forlonge got off to a winning start over fences with victory in the Roche Group At Vista Beginners Chase.

The Grade One-winning novice hurdler — last seen finishing fourth in the Supreme Novices’ Hurdle at Cheltenham in March — was sent off at 4-11 for his first try over the larger obstacles and Paul Townend was soon disputing matters with Conflated.

The latter proved a determined rival and the pair matched strides for most of the way, before the Willie Mullins-trained market leader just began to get the better of the argument from the third-last.

Conflated would not go away, however, and there was a scare for odds-on backers two out when the grey jumped to his right and stumbled on landing, although he was quickly back on an even keel.

His jump at the final fence was much better and he came home full of running for a six-length success. Bookmaker quotes varied afterwards for Cheltenham between the Arkle and Marsh Novices’ Chase, but it seems the longer event might ultimately be favoured.

Mullins said: “It was a satisfactory introduction and I’ll be going out in trip with him now, it’ll be minimum two-and-a-half (miles) for the rest of the year.

“I haven’t any plans made for him yet, but I was happy enough with that.

“He jumped very well, obviously he made that mistake at the second-last and he got one wrong before the ditch, but by and large I was happy with him for a first-time-out novice chaser.

“At the second-last I was happy with the way, when it looked like he was going down, he found another leg and picked himself back up.”

When asked if the Joe Donnelly-owned winner enjoyed going right-handed, he added: “Yes, but it won’t stop me going left-handed again with him.

“I’d say a longer trip will be a help going left-handed. We’d have time for a run before Christmas, but it’s not essential.”

Druid’s Altar put up a game performance in testing conditions to make a winning debut over jumps in the Osprey Hotel 3-Y-O Hurdle.

JJ Slevin had the Joseph O’Brien-trained gelding up with the pace from the start to share pace-making duties with Perry Owens.

The complexion of the race changed from four out where Druid’s Altar (7-1) and Ilmig moved clear of the remainder, until the former took control to go on and score by four and a quarter lengths, with Perry Owens third.

Druid’s Altar was given a quote of 33-1 for the Triumph Hurdle.

Assistant trainer Brendan Powell said: “He’s a tough, hardy horse. Obviously he had the five runs (on the Flat) and won in testing ground over a mile and a half in Listowel.

“He’s jumped well at home and he stays. In an ideal world he could have got a lead longer, but JJ said he had to let him stride on.

“He had a good look at the last and I’m sure if something went with him in a better race he’d keep on.

“He’s not slow, he stays the trip well, but he’s got a good cruising speed. He’s a lovely big horse and hopefully he’ll have a future.”

Holymacapony (7-2) looked a exciting recruit when making a successful debut under rules in the Naas Oil Maiden Hurdle.

The only previous experience the four-year-old had was when winning a point-to-point and he looked decidedly useful in producing an emphatic display.

De Bromhead said: “We’re delighted with that. He came well recommended after he won his point-to-point.

“We’ll see how he comes out of it and we could maybe look at the race at Navan before Christmas, over two and a half miles (Grade Two Navan Novice Hurdle).”