Presenting Percy puts on ‘exhibition of jumping’ at Thurles 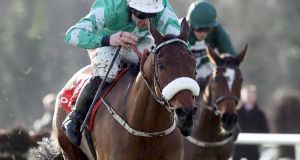 Presenting Percy got back to winning ways in fine style in the boomerang.ie Chase at Thurles.

In what was a high-class affair for a Thursday afternoon, it was the Gordon Elliott-trained nine-year-old, the only runner in the field who had the benefit of a previous run this season, who eventually came out well on top.

Rachael Blackmore tried to make all on Cheltenham Gold Cup fourth Monalee – but both Kemboy and Presenting Percy were travelling ominously well behind him before turning for home.

At the third-last Presenting Percy (3-1) jumped up on Monalee’s inside for a share of the lead, while 11-10 favourite Kemboy was just behind as Darasso found it all too much.

The three jumped the second from home almost in a line, but on landing Presenting Percy – having his second run for Elliott after moving from Pat Kelly – left Kemboy in his wake, winning by six and a half lengths for Jack Kennedy, with Monalee another two and a quarter lengths back in third.

Kennedy said: “He did it very well, he had race-fitness on his side but he put in an exhibition of jumping and quickened up well at the back of the second-last.

“I had sat on him previously at home, but he is very straightforward and is a dream to ride. He jumps and travels away and I was happy at all stages. I was delighted with the way he travelled and I was nearly half-taking him back going across the top I was going that easy.

“That win might do him the world of good and hopefully he can keep going after that.”

Owner Philip Reynolds was thrilled to see Presenting Percy get his head in front again, and could now look to the Savills Chase at Leopardstown over Christmas.

He said: “It’s a huge relief – I watched the race from behind the couch!

“I was most pleased to see the way he finished and how he picked up from the back of the second-last. Anne, my wife, says putting the sheepskin noseband back on made the difference.

“It’s just nice to see him back and maybe now we can make a plan. Well done Gordon and Jack.”