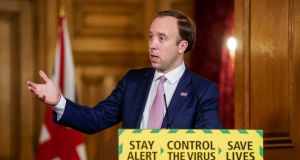 When horse racing became the first major sport in the UK, alongside snooker and greyhound racing, to return to action following its suspension due to Covid-19 at the start of this month, Matt Hancock was forthright in his delight.

“Thanks to the nation’s resolve, horseracing is back from Monday,” the health secretary tweeted. “Wonderful news for our wonderful sport.”

Some of those replying, including Jo Goodman, whose 72-year-old father, Stuart, died from coronavirus on April 2nd, did not consider the news to be a moment for such unbridled celebration.

But Hancock, along with other senior Conservatives, has nurtured a close relationship with the industry. Hancock is the MP for Newmarket, flat horse racing’s headquarters and seat of the Jockey Club, and he receives tens of thousands of pounds in donations from wealthy racehorse owners, trainers and other members of the sport’s establishment.

The Jockey Club, the historic organisation that owns racecourses at Newmarket and around the country, has two prominent Conservative figures on its board: Dido Harding, the former TalkTalk chief executive and Tory peer who has been put in charge of the government’s crucial Covid-19 test-and-trace operation; and Rose Paterson, the wife of the senior backbench MP Owen Paterson. Rose Paterson is also chair of Aintree racecourse, whose signature race, the Grand National, is sponsored by Randox Health, the diagnostics company advised by her husband that has been given a £133 million (€155m) contract to produce testing kits – without any other firms being given the opportunity to bid for the work.

A source close to the Jockey Club said Harding and Rose Paterson had played no part in the process of racing being given the go-ahead to restart, which was managed by the governing body, the British Horseracing Association, to meet safety protocols set out by the Department for Digital, Culture, Media and Sport. A spokesperson for Hancock said he had not taken part in any of the discussions, nor in the decision for the Cheltenham festival to go ahead on March 10th-13th as the virus was spreading.

During the election campaign Hancock rode the thoroughbred Star of Bengal, a horse owned by Carole Bamford, founder of the Daylesford organic farm shop chain, and wife of Anthony Bamford, the chairman of JCB, a prominent donor to the Conservative party and Brexit supporter. Hancock, wearing the party’s rosette on the gallops, tweeted afterwards: “Brilliant riding out in Newmarket this weekend on Star of Bengal. I’ll always support the wonderful sport of horseracing.”

Asked about the ride, a spokesperson for Lady Bamford said: “Lady Bamford has never met and does not know Matt Hancock. Equally she was unaware of him riding Star of Bengal last December.”

Hancock’s spokesman said the ride had been arranged with John Gosden, Star of Bengal’s trainer. He was a donor to Hancock last year, paying £10,000 (€11,600) towards his constituency office costs. Gosden’s wife, Rachel Hood, a Conservative councillor on Suffolk county council, former president of the Racehorse Owners Association and mayor of Newmarket until last month, donated £10,000 in December 2018. Neither responded to an email with questions about the donations.

The entry for Hancock in the current House of Commons register of members’ interests lists £68,000 (€79,000) in donations since last May paid by horse racing industry figures. The largest was £25,000 (€29,000) paid by Unex Holdings, a Newmarket company owned by Bill Gredley, a celebrated racehorse owner and property developer, which made a £24m (€28m) profit in 2018-19, according to its most recent published accounts.

He said Hancock came to the Christmas lunch and other events for older people in Newmarket that Gredley runs through his longstanding charitable foundation. “That’s how I got to know him, and I think he’s doing a great job. I haven’t discussed the return of racing with him; we’ve never talked about it.”

Tattersalls, the leading racehorse bloodstock auctioneers and valuers based in Newmarket, which hold a flagship annual sale at the Cheltenham festival, gave Hancock two separate £10,000 donations, one in May last year for his constituency office, the other in November during his general election campaign. The company did not respond to questions about the reasons for the donations.

Peter Stanley, the owner of the New England stud in Newmarket and a Jockey Club board member, who donated £5,000 towards Hancock’s constituency office costs, explained: “As MP for Newmarket I think he recognises that horse racing is more of an industry than a sport. He knows better than most that we are a huge export industry and foreign currency earner. I did not speak to him about getting racing started.”

Claire Unwin, who stood for Labour unsuccessfully against Hancock at the election, said of the donations: “They show that he represents the wealthy, horse racing establishment in Newmarket and not the whole constituency, which is very unequal and where there are areas of severe deprivation.”

Hancock declined to respond to that charge. His spokesperson said of the donations: “Matt has been an avid fan of horse racing since childhood and is passionate about the sport. Any political donations have been declared properly and, of course, done so in an open and fully transparent way.” - Guardian

1 Tour de France: Every yellow jersey winner must feel guilty by some association
2 Clifford brothers to the fore as East Kerry retain title
3 Born to ride, born to win: Sam Bennett, the making of a green machine
4 Juan Imhoff and Racing 92 leave it late to end Saracens’ reign
5 Keith Duggan: Surreal story of John Delaney needs to act as a wake-up call for FAI
Real news has value SUBSCRIBE