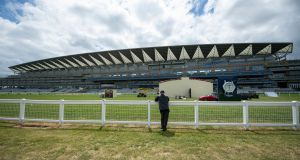 A member of the public looks on as the finishing touches are made at Ascot Racecourse. The Royal Ascot meeting will take place behind closed doors between Tuesday June 16th and Saturday June 20th. Photo: Edward Whitaker/PA Wire

As well as being behind closed doors, and shorn of its famed pomp and ceremony, this week’s Royal Ascot will also be without a lot of international input.

Aidan O’Brien, bidding to land an 11th leading trainer award, will have half a dozen runners on Tuesday.

Ireland’s champion trainer will have five contenders on Wednesday and four more on Thursday.

But the only other Irish-trained hopeful over the first three days will be Darren Bunyan’s outsider Hit The Bid in the Kings Stand Stakes on day one.

Regulations in relation to coronavirus, and how anyone entering Ireland has to self-isolate for 14 days, are matched by restrictions on races overseas based horses can run in.

Otherwise, for a week that usually attracts some of the world’s best, there is a single French runner on Tuesday while the American trainer Wes Ward has a couple on Wednesday.

But the impact of the Covid-19 pandemic means that this will inevitably be an eerie renewal of the world famous event.

Royal Ascot has been skipped during the world wars, postponed due to a train strike, and even moved hundreds of mile north to York in 2005 while the track was being rebuilt.

However, it has never been hollowed out like this, with no crowds, no bookmakers, and not even the Queen allowed attend Britain’s biggest social event of the year.

Almost the sole logistical touchstone left over are the five actual dates on which it takes place.

Keeping the meeting on its original schedule while so much else got pushed back by a month has proved contentious in some quarters but deemed vital to allow some return to fixture normality later this summer.

The result is a race like Tuesday’s King Edward VII Stakes – traditionally known as the “Ascot Derby” – is now a trial for next month’s real thing at Epsom.

Health protocols that have allowed racing resume behind closed doors, both here and in Britain, are set to get their most thorough examination yet.

The incongruity of a Royal Ascot with only essential personnel on the ground ensures there will be no decrease in public interest when the unique 2020 version starts at 1.15 on Tuesday.

The opener will be the Buckingham Palace Handicap, lost from the card when the Commonwealth Cup was introduced in 2015, but now back on the rota.

Always a day one highlight, though, has been the Queen Anne Stakes, scene of perhaps Frankel’s most spectacular victory in 2012 but this time an apparently wide-open 16 runner heat.

O’Brien’s Ballydoyle team have representatives waiting in England to take charge of horses flown from Shannon so that no personnel are required to self-isolate on their return.

It’s an organisational knot that nevertheless delivered English 1,000 Guineas success with Love earlier this month and gets its biggest numerical test this week.

With O’Brien an 11-10 favourite to be leading trainer for a sixth year in a row, Circus Maximus gets the ball rolling in the Queen Anne.

He won the St James’s Palace Stakes a year ago in front of a thronged audience and later added a controversial success in the Prix Du Moulin.

A stiff, straight mile should suit the colt although likely challengers are plentiful. Maybe the unexposed Mohaather could emerge on top, particularly if ground conditions ease.

Mogul is being touted as Ballydoyle’s top Derby contender this year. He is a general 8-1 shot for Epsom but tops the betting for the Curragh Derby which takes place a week beforehand.

If the colt can’t beat his handful of King Edward rivals though such considerations might prove academic.

Sceptical is the top-rated Irish sprinter but Hit The Bid is a talented speedster in his own right. Whether he’s up to beating an A1 Battaash is another matter.

At his best, Charlie Hills’ mercurial star should this opposition at his ease. He has never won at Ascot but has been runner up in the Kings Stand for the last two years.

Given his fragile temperament, Battaash might be the solitary figure actually suited by this unique Royal Ascot.