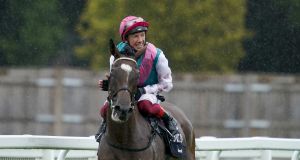 The stage is set for the 100th Qatar Prix de l’Arc de Triomphe on Sunday and Enable’s attempt to secure a unique hat-trick in Europe’s greatest all-aged race.

The impact of the coronavirus pandemic is an overarching backdrop and potential history will only be witnessed first-hand by a limited audience of 1,000 people at Longchamp.

But the scale of the accomplishment Enable has in her sights means that come 3.05 on Sunday afternoon all eyes will be on this remarkable mare and jockey Frankie Dettori.

If synchronicity suggests the 100th Arc deserves a singular moment like Enable becoming the first horse to win it three times then the unprecedented circumstances would also make it a huge morale boost for an entire sport.

Ordinarily the absence of Aidan O’Brien’s star filly Love due to very testing ground would inject a sense of anti-climax. News of champion jockey Oisín Murphy’s positive cocaine test emerging on the eve of Arc weekend would normally cast a pall over one of Europe’s great racing occasions too.

As if that wasn’t enough, news on Friday night was that batches of potentially contaminated horse feed could threaten the participation of a number of Irish runners at Longchamp including Ballydoyle’s four Arc runners.

The Gain firm said it is advising trainers to not feed horses its equine products while it investigates how traces of the prohibited substance Zilpaterol got into various batches of its products.

However the pull of an epic sporting feat ensures that despite everything Enable is the undisputed story.

It was the same a year ago only for very testing ground, and perhaps Dettori getting his pace fractions wrong, to conspire to produce an unlikely spoilsport in Waldgeist.

Since then everything has been geared by John Gosden’s team towards another hat-trick attempt.

Should Enable get it done this time it will mean her becoming just the second horse to regain the Arc crown as well being a 12th overall Group One victory that would surely provide a perfect curtain-call to a stellar career.

Love may be absent but four of Enable’s 14 opponents are from Ballydoyle including the supplemented Derby winner Serpentine.

He will break from an outside stall under Christophe Soumillon but on testing ground the impact of the draw is diluted.

Just inside Serpentine is Enable’s stable companion Stradivarius, one of the great stayers of the modern era trying to transfer his excellence to middle-distances.

The last true stayer to win the Arc was Séamus McGrath’s Levmoss all of 51 years ago, although Stradivarius has shown mile and a half form already this year and, crucially, is proven on soft ground.

Enable is too judged on her second to Waldgeist a year ago. Whether a repeat of that sort of effort will be enough this time is impossible to predict although bookmaker odds suggest it may be.

Nevertheless this is a six-year-old mare whose King George victory during the summer was in a three-horse race and who has already shown remarkable resilience to maintain her form as well as she has for as long as she has.

It’s worth recalling how a place behind her last year was Sottsass. He too raced prominently through the race and was ultimately swallowed up by Waldgeist. What it showed, however, is that last year’s French Derby hero can go on the surface.

Ever since his trainer Jean Claude Rouget has been targeting an Arc return too but under the radar in comparison to Enable. A career best performance on Sunday could make him the Arc spoilsport this time.

There are Irish-trained runners in all seven other Group One races at Longchamp over the weekend, although the clear sentimental favourite among them will be Princess Zoe in Saturday’s Prix du Cadran.

Tony Mullins’s mare captured the public imagination in a big way during the summer with a series of victories, the last three of which were at Galway.

Her progress from a rating of 70 to 109 appears to make Princess Zoe the biggest threat to the top French stayer Call The Wind in this two-and-a-half mile marathon.

Denis Hogan’s 18-year-old apprentice Joey Sheridan is unable to claim off the grey yet retains the mount, a factor which will only boost popular support even more.

Sheridan’s old ally Make A Challenge will try to give Hogan a maiden Group One too in Sunday’s Prix de l’Abbaye. Soft ground and the absence of Battaash makes the Irish sprinter a leading player.