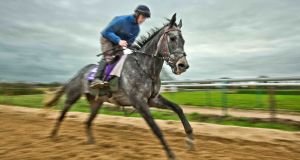 Amateur rider Luke McGuinness has been suspended until at least December of 2021 after testing positive for cocaine for a second time.

McGuinness returned the positive test at a point to point meeting in January and a referrals panel at the Irish Horseracing Regulatory Board handed him a six year suspension of his licence this week.

However they said he can reapply for his licence in December of next year provided he complies with strict terms and conditions in the interim.

Earlier this year the IHRB introduced an entry level ban of five years for any jockey who tests positive for cocaine. That was put in place as a supposed deterrent after a spate of positive tests for the drug with 13 riders testing positive for cocaine in the previous four years.

On Friday the IHRB confirmed two more positive cases have emerged since then. Another amateur rider, Ross McLeigh, returned a positive outcome for cocaine at Leopardstown on March 2nd.

This week a referrals panel hearing suspended him for four years, with effect from June 22nd. They said they would review the matter again though within one year should McLeigh reapply for his licence.

However McGuinness is the first rider to test positive twice for cocaine.

In March of 2018 the jockey, who works for top trainer Gordon Elliott, got a two year ban for a random test returned at Navan the previous November.

His licence was restored following a review after six months. Following his latest positive outcome the remaining 18 months of that original ban has been reactivated, starting from June of this year.

In evidence to the referrals panel, the IHRB’s chief medical officer, Dr Jennifer Pugh, said McGuinness had approached her for support in early 2019 and in September of that year had also availed of the services of a counsellor, Pat Brennan.

She confirmed that McGuinness had completed an intense five month residential programme from May to October 2020 in Cuan Mhuire treatment centre and that he had made immense progress since February.

An IHRB statement on Friday also said: “Mr McGuinness outlined difficulties that he had experienced and accepted that he had failed to make the most of his opportunities since serving his first suspension.

“He confirmed the details of his rehabilitation programme and acknowledged that he now recognised that he didn’t properly address some unresolved issues following his first suspension.

“He informed the committee of his current employment with trainers, Gordon Elliott and Nigel Slevin, and the ongoing support he receives from his family and Mr Brennan.

“He concluded that his time in Cuan Mhuire had brought an understanding of the importance to remain focussed and continuing on the right path.”

The McGuinness and McLeigh cases were heard remotely via Zoom on Wednesday when another amateur rider, Conor Murphy, was allowed return to race-riding.

Murphy was banned from riding for five years in January of 2019 following a positive test for cocaine although he was allowed reapply for his licence after 18 months.

In a statement the referrals panel “noted the positive engagement from Mr Murphy, the fact that he has continually tested negative for prohibited substances when tested at random over an extended period of time by Dr Pugh, and changes in his lifestyle and professional life.