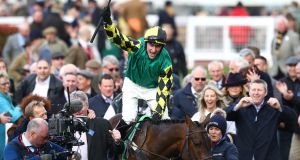 Gordon Elliott could be in line for a record Cheltenham festival tally after bringing his haul for the week to six with a day three hat-trick.

The 549/1 three-timer brought up by a rejuvenated Samcro in the Marsh Chase, a 1-2 in the Pertemps Final led by the back to back winner Sire Du Berlais, and success for Milan Native in the concluding Kim Muir, means his record-equalling 2018 score of eight winners could be under threat on Friday.

Delta Work in the Gold Cup leads an 11-strong Elliott team into the final day’s action where he also has a handful of runners in the Martin Pipe Hurdle.

The only bittersweet note for the Co. Meath trainer on Thursday was confirmation that Michael O’Leary’s 11-time Grade One winner Apple’s Jade has been retired.

She faded to eighth in the Paddy Power Stayers Hurdle won by the 50-1 Lisnagar Oscar. But even that appeared inevitable in the light of fading form and ultimately Apple’s Jade emerged unscathed after cutting out the running for much of the race.

O’Leary’s Gigginstown Stud team indicated afterwards that Apple’s Jade will go to stud with an initial covering by Walk In The Park.

“She enjoyed herself today. The engine just isn’t going as fast as it used to. She owes us nothing,” Elliott said.

In contrast there was unabashed delight after the enigma that is Samcro returned to the festival winners enclosure two years after looking to have the racing world at his feet following a Ballymore victory.

With one win in seven subsequent starts his days as a top class contender looked all but over.

However a combination of a wind operation and Davy Russell riding for the first time seemed to spark new life into the Gigginstown star.

The nose margin over Melon couldn’t have been tighter but it was as good as a furlong for Elliott.

“Samcro was in the doldrums for a while and lost his way so it means a lot to get him back. He’s one of the favourites in the yard and we love him,” Elliott said.

“They (the staff) have spent day and night trying to get this horse right. He hasn’t been scoping clean and it has been hard to get him to scope right. Everyone was knocking him when he was in the doldrums - I probably lost a bit of faith in him myself,” he admitted.

Sire Dub Berlais continued what is also a vintage week for JP McManus and Barry Geraghty in the Pertemps but it the Gigginstown colours again in the last as Milan Native won the Kim Muir under jockey Rob James.

Elliott’s great rival Willie Mullins had been having a festival of near-misses until Ferny Hollow’s bumper success on Wednesday and might have feared his luck was out with Samcro beating Melon and the sentimental favourite Faugheen.

Considering he had never won in three previous festival starts Min was an unlikely saviour. However freed from his old nemesis Altior he finally stepped up to the mark in the Ryanair Chase.

With both the favourite A Plus Tard and the defending champion Frodon failing to fire it was the 16-1 outsider Saint Calvados who emerged as Min’s greatest threat.

There was a brief moment when he threatened to peep up the inside of a Mullins star but Paul Townend decisively took the initiative and Min held on by a neck.

“The horses have been running well and just haven’t been getting the rub of the green. Melon ran great earlier and all the horses seem to be firing without winning. Watching Min jump today he was fantastic through the air and when he needed a jump he got them.

“It was probably wobbly knee time after the last when Saint Calvados came up the inside but he still had a little bit left in the tank,” Mullins said.

Later Concertista continued Mullins’s 100 per cent dominance of the mares novice hurdle. Beaten by a head in the race a year ago the 9-2 shot ran out a 12 length winner over her stable companion Dolcita. It was the fifth renewal of the race and a fifth Mullins success.

The Stayers Hurdle turned into a bookmakers benefit with the Welsh trained 50-1 shot Lisnagar Oscar holding off the 20-1 Irish outsider Ronald Pump and Mullins’s Bacardys (33-1) making the frame. The odds on favourite Paisley Park faded to seventh.

The official third day attendance was 65,218, down from last year’s 67,821. Champion amateur jockey Patrick Mullins was beaten a nose on Melon in the Marsh Novice Chase and afterwards picked up a two day suspension for using his whip above the permitted level.

Daryl Jacob won the mares novice hurdle on Concertista by 12 lengths but also got two days for using his whip “when clearly winning after jumping the final hurdle.”

Gavin Sheehan got four days for using his whip above the permitted level when runner up in the Ryanair Chase aboard Saint Calvados. Sheehan later won the Brown Advisory Plate on the 100-30 favourite Simply The Betts.