Leopardstown to continue watering and ensure ground is ‘fit for purpose’ 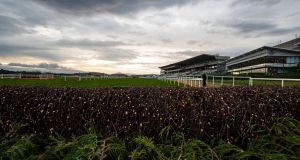 Watering is continuing at Leopardstown to ensure the ground is fit for purpose for Dublin Racing Festival. Photograph: Bryan Keane/Inpho

Some wet weather may be forecast but watering will continue at Leopardstown ahead of next week’s Dublin Racing Festival to provide ground the track’s new chief executive wants to make sure is “fit for purpose”.

Leopardstown’s chief executive Tim Husbands underlined on Friday that he and his team are very aware of the importance of next weekend’s €2 million showpiece event for the sport.

The build-up to the festival continues to be dominated by speculation on what ground conditions will be like especially on the steeplechase track.

On the back of the second day of last year’s festival, which was decimated with 22 non-runners due to quick going, leading figures such as Willie Mullins and Noel Meade have repeatedly urged watering to ensure a safe surface.

The issue arose again on the final day of last month’s Christmas festival when a Grade One novice chase was reduced to just three runners.

The going on the chase course is currently yielding, and yielding to soft in places, with some rain forecast over this weekend. However, Leopardstown’s management plan to continue the watering policy it began earlier this week.

“The programme of watering which we’ve been undertaking the past week continues over the weekend and into the next week to ensure that we’ve going that’s fit for purpose,” Husbands said.

“We’re acutely aware this is a really important festival for us so we hope and wish and believe that everything will go really well and it will be an exciting event for the whole racing industry,” he added.

Expectation that watering will work has prompted connections of Presenting Percy to target next Sunday’s Paddy Power Irish Gold Cup.

Gordon Elliott has also resisted the lure of Cheltenham’s Cotswold Chase for his own big-race hope, Delta Work, who will wait instead for next week’s €250,000 feature.

It is one of eight Grade One contests up for grabs which will see many leading Irish fancies warm up for the Cheltenham festival in March.

Before that this weekend also has a number of potential Cheltenham contenders getting in final match practice and champion jockey Paul Townend will have surprised some with his pick for Saturday’s Grade Three feature at Fairyhouse.

The Solerina Hurdle has thrown up top-notch winners for the last three years in Honeysuckle, Laurina and Shattered Love.

Townend has opted for Yukon Lil from a Willie Mullins trio that includes the Grade One bumper star Colreevy and the exciting French recruit Dolcita.

The latter is a general 5-1 ante-post favourite to continue Mullins’s dominance of Cheltenham’s Dawn Run Novices Hurdle after impressing on her Irish debut at Tramore last month.

Nevertheless Townend has gone with the Naas winner Yukon Lil who is among the 20-1 outsiders for Cheltenham.

One of Sunday’s Naas features is a Grade Three where Carefully Selected bids to qualify for Cheltenham’s National Hunt Chase in which he is currently a 9-2 favourite.

“It isn’t ideal running back so quickly after he won at Punchestown but he needs to be placed in a chase over two miles seven and a half furlongs or more in order to qualify for Cheltenham,” Willie Mullins explained on Friday.

The Limestone Lad Hurdle went to the subsequent Champion Hurdle hero Espoir D’allen last season while the 2017 winner, Sutton Place, makes his comeback in it after almost two years on the sidelines.

Rachael Blackmore teams up with an intriguing Australian trained runner, Big Blue, although a more familiar name may emerge as the winner through the Mullins trained Stormy Ireland.

The former Irish Gold Cup hero Edwulf looked unlucky on his hunter chase debut at Down Royal and can book a Cheltenham place in Sunday’s finale.