Leopardstown: Stewards show no mercy as Min loses out to Simply Ned 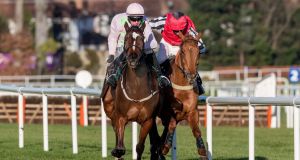 Paul Townend on Min interferes with Mark Walsh on Simply Ned in the closing straight during The Paddy’s Rewards Club Steeplechase at Leopardstown. Photograph: Morgan Treacy/Inpho

Simply Ned was awarded the Paddy’s Rewards Club Chase at Leopardstown after odds-on favourite and first-past-the-post Min was disqualified for causing significant interference.

The pair came extremely close together after jumping the last, with Nicky Richards’s race regular Simply Ned going for a daring run up the rail under Mark Walsh.

Min, who had made virtually all the running, first appeared to bump Simply Ned not long after the last before again leaning on him with the winning post in sight.

That clash forced Simply Ned into the rail, sending some pieces of plastic flying, and following a lengthy deliberation, the stewards opted to reverse the placings.

Min had been sent off the 2-7 favourite for the two-mile-one-furlong heat but he had been forced to work hard to fend off Simply Ned, eventually passing the post with half a length to spare.

For 16-1 shot Simply Ned it was a long-awaited triumph as, having placed in the last three renewals of this race, he finally enjoyed his day in the Grade One spotlight.

Walsh said: “You don’t want to win a Grade One like that but I felt with a clear run I’d definitely have won. He [Min] impeded me the whole way up to the line.

“I jumped the last behind Paul [Townend; Min’s jockey] but there was plenty of room.

“When the rail came Paul started leaning on top of me and there was a significant bang quite close to the line. He broke the line and was impeded really badly.

“Fair play to connections, they kept bringing him for this and I must thank Davy Russell for getting me the ride.”

Rewards Richards said: “The other horse clearly gave him a couple of bumps and the second one was a fairly hefty one.

“Mark came in and was adamant he would have won the race.

“The old horse was coming and I’d say justice has been done.

“Mark gave him an absolute peach of a ride. What a ride he gave him and he did absolutely everything he was asked.

“It will probably be the plan to come back here in February.”

On winning a Grade One with Simply Ned, the Greystoke handler added: “It’s took a bit of doing but we got there at the end of it.

“He’s been a great horse and we bought him up the road at Fairyhouse.

“He cost €23,000 and was for nothing, really. He’s been a great horse and very consistent at a high level. It’s great that he’d had his day at the top.”

To compound Townend’s misery, he was also handed a two-day ban for careless riding.

Favourite Mengli Khan appeared to be dictating matters approaching the second-last before the Royal Bond winner dived through the wing and unseated Jack Kennedy.

That left Patrick Mullins in front on Sharjah, with Townend riding hard on stablemate Real Steel approaching the last.

But once Mullins asked his mount for a big leap he took a crashing fall, while Real Steel also hit the deck independently.

“I’ve never seen anything like that,” said trainer Willie Mullins.

“I was just waiting for them to bring down our third runner, which would have really capped off the day, but it just shows you’ve got to be in these races.

“Whiskey Sour was definitely the fourth of ours coming into this and he ends up winning it! It was just an extraordinary race.

“He’s probably the smallest horses in the yard. It was a lucky win, end of story.

“It was an extraordinary race and I don’t know what to take from it.”

David Mullins said: “The plan was to drop him in but he fell asleep on me.

“I’d say the earplugs have done the trick for him and he’ll be a lot sharper the next day. They went a right good gallop.”

All horses and jockeys were reported to be fine in the aftermath.

Anibale Fly carried a big weight to victory to provide JP McManus with another victory in the Paddy Power Chase.

Tony Martin’s seven-year-old was a class act as a novice last season, chasing home Coney Island in the Drinmore in December.

He had apparently lost his way since but had been running over trips short of his optimum and back up to three miles he defied a mark of 148 under Donagh Meyler.

As ever, there were plenty in with chances at the second last as Vieux Morvan led them a merry dance.

When he began to weaken Anibale Fly (14-1) hit the front and was not to be denied.

Meyler said: “His form last year behind Disko and the like was very good.

“I know he had a lot of weight but class will out and he showed his class.

“One thing he does do is stay and he seemed to relish it.”

Martin said: “He wants a proper trip. He’s an old-fashioned staying horse and he jumped and galloped.

“This is what you get up everyday for, to have days like this. It doesn’t happen too often but when it does it’s great.

“He was favourite for the Feltham last year, the race Might Bite ran in. I don’t know what happened then, whether it was ground or trip or whatever.

“He won well for a competitive handicap. He’s after going through the [handicap] roof there now and could be anything.”

A reasonable horse on the level for Joe Murphy, he was wearing a hood on his first start for Willie Mullins but was sent off the 5-4 favourite.

Townend spotted his opportunity to take up the running when Khuda hit what is normally the second last but ended up being the last as the flight in the straight was omitted due to problems with the sun.

Townend kept his mount on the bridle for as long as possible before scooting clear to beat 50-1 chance Room To Roam by seven and a half lengths.

“He settled great and jumped well for a first run over hurdles and he did everything right. The hood has done the job on him,” said Townend.

“I was afraid when they bypassed the first and it was such a long run that he could get keen and I failed to get cover on him down to the first, but he was good.”

Gordon Elliott’s Tycoon Prince won what could turn out to be a hot little beginners’ chase.

Willie Mullins ran Montalbano, who fell at halfway, and the favourite Bunk Off Early, but Townend never appeared totally happy on the latter.

Le Martalin set a strong gallop throughout but it was another Gigginstown runner in Tycoon Prince who quickened up best.

Davy Russell, as is his wont, decided to bide his time and on the long run-in with the last fence omitted, kept the 3-1 shot up to his work to beat Bunk Off Early by six and a half lengths.

Elliott said: “He was a good bumper horse. He had a nice run at Navan the last day and we knew he’d come on a good bit from it.

“It’s nice to get a winner here. We were having them everywhere else but if you don’t get them here you get forgotten about!

“We’ll keep him small and try and find a winners’ race for him, then see where we go from there.”

1 Tianna Bartoletta: ‘After you’ve gotten your medal, you become black in America again’
2 Timo Werner giving up on Liverpool dream on path to being truly wanted
3 Ian O’Riordan: An education in race and running during college days in America
4 Betting shops face uncertain future as they prepare for Monday reopening
5 Mature Ringrose keeping the ups and downs of rugby life in perspective
Real news has value SUBSCRIBE