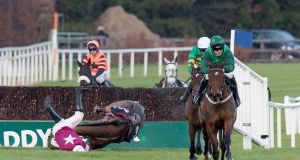 Paul Townend guides Footpad to a convincing victory in the Racing Post Novice Chase as Death Duty, with Davy Russell on board, falls at the last at Leopardstown. Photograph: Morgan Treacy/Inpho

Footpad proved the ace in Willie Mullins’s St Stephen’s Day pack with a superb Grade One success at Leopardstown.

The champion trainer feared his luck was out following a series of mishaps earlier in the day, none more than when Al Boum Photo threw away a likely Grade Two victory at Limerick by falling at the last.

That he started a 1-2 favourite – and his fall handed a valuable 1-2 to Gordon Elliott – added to two earlier beaten favourites prompted Mullins to ponder if the Christmas fates were turning against him.

The 4-6 favourite for the Racing Post Novice Chase never looked to come out of a second gear that nevertheless had his big rival Death Duty in trouble from the second last.

As Footpad scooted up the straight at his ease under Paul Townend, Death Duty was even struggling to hold Any Second Now for the runner-up spot when coming down at the last.

It completed three-in-a-row for Mullins in Leopardstown’s St Stephen’s Day feature and considering the sequence began with the brilliant Douvan no one could fail to spot the significance of the legendary trainer’s enthusiasm for his new novice star.

“He’s electric over his fences and has been from day one. He’s as good a jumper as I’ve seen in our place for ages. He’s able to gain four or five lengths at a fence and is as good a novice as I’ve seen for a long time to jump,” he said.

Bookmakers weren’t long taking the hint and some slashed Footpad to 7-4 favourite for Cheltenham’s Arkle Trophy in March.

“Riding a top class two-miler at that speed, and who jumps the way he does, is brilliant,” enthused Townend. “To do that on only his second start over fences is very good. He couldn’t be more impressive.”

A return to Leopardstown for the Irish Arkle at February’s new ‘Dublin Racing Festival’ is likely to be Footpad’s next assignment.

But in the longer term the potential within a horse which has the pace to finish fourth in last season’s Champion Hurdle, the quality to win France’s version of the Triumph Hurdle a year before, and enough stamina to be Grade One-placed at three miles over flights in April, looks limitless.

Mullins doubled up in the final bumper when the 5-4 shot Blackbow made a winning debut.

The English point to point winner carried the same colours of the late Archie O’Leary that Florida Pearl had when making his own racecourse debut in the same race 21 years ago. Blackbow is owned by a syndicate comprising of the O’Leary family and friends.

“He’s one to look forward. He’s big, backward and there’s a lot of improvement in him,” said Mullins.

The diminutive Espoir D’allen lacks the physical scope for a similar description but after his 1-2 victory in the Knight Frank Hurdle there’s no question he is Ireland’s leading juvenile right now.

Mark Walsh guided the JP McManus-owned star to a smooth defeat of the Gordon Elliott pair, Farclas and Mitchouka, which saw his Triumph Hurdle odds for Cheltenham cut as low as 15-2. Only McManus’s English based Apple’s Shakira heads him in the festival betting.

“He’s very straightforward, jumps great and is very professional for a juvenile,” said trainer Gavin Cromwell who avenged Jer’s Girl’s narrow defeat in the race two years ago. “He hasn’t missed any dance and has been busy but he’ll definitely get an entry back here [February’s Grade One Juvenile Hurdle].

Henry De Bromhead realised his Christmas luck was in right from the start after Ellie Mac’s emotional and dramatic 50-1 success in the opening maiden hurdle.

The Co Waterford trainer then proceeded to land a 4,334-1 Leopardstown hat-trick completed by Paloma Blue and the 16-1 outsider Tisamystery in a handicap chase.

The 20-year-old Mullinavat jockey, Daniel Holden, had his first ever winner on Ellie Mac and it was another claimer, Liam Quinlan, who stepped in for Jack Kennedy on board Tisamystery after Kennedy was unseated from Avenir D’Une Vie in the big race.

”It’s been a great afternoon,” smiled De Bromhead. “I literally just booked Liam about five minutes ago. Davy Russell recommended him after Jack was sadly stood down.”

Sparky Stowaway scored for Sean McDermott in the handicap hurdle, the 10-1 shot proving a length too good for Banksoftheshannon.