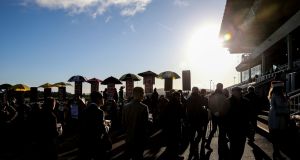 Thursday’s Leopardstown card is subject to a 7am inspection due to forecast frost and fog. Photograph: Gary Carr/Inpho

Leopardstown’s authorities say they have taken every step to give themselves a “fighting chance” of racing on Thursday, although day three of the Christmas Festival hinges on a 7.30 morning inspection.

The threat of overnight frost and fog has already resulted in the race order for Thursday’s action being reshuffled with the two races over fences – including the featured €150,000 Christmas Chase – placed at the end of the card.

That is because ground on the steeplechase course has been opened already this week, leaving it vulnerable to any frost and requiring more time to thaw out.

“We’re being given a range of minus two to minus four overnight. But we’re unsure if it will be frost or fog,” said Leopardstown’s clerk of the course, Lorcan Wyer, on Wednesday. “If the skies stay clear it could get down to minus four. If fog descends that will prevent it getting so low, maybe minus one. But the problem with fog is it can be slow to clear.”

In 2009, fog forced the cancellation of the same card which was moved to two days later. It resulted in a big race win for the Alex Ferguson-owned What A Friend.

“It’s an uncertain situation at the moment and we won’t know until the morning,” Wyer added. “We will meet at 6.30 and take a look. It’s a plus that we haven’t had any frost here already this week. But we’ve taken every step we can to give ourselves a fighting chance of racing going ahead.”

Meanwhile, officials at Chepstow have moved quickly to reschedule the Coral Welsh Grand National for January 6th after Wednesday’s fixture was abandoned due to a waterlogged track.

The three-mile-five-furlong heat was due to be the feature event on a seven-race card but rain and snow over the last two days has left the track unraceable.

Three of the last seven renewals have been run in early January and in consultation with the race sponsor and the British Horseracing Authority, the card has been saved once again.

Thursday’s National Hunt meeting at Catterick must survive an 8am precautionary inspection due to the threat of overnight frost, while Leicester’s meeting appears in more doubt.

With the course currently covered by between one and two inches of snow, clerk of the course Jimmy Stevenson has announced an 8am inspection.