Rachael Blackmore in pursuit of glory at Leopardstown 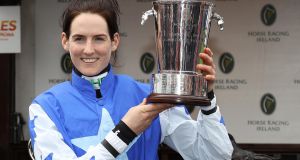 Rachael Blackmore lost out to Joseph O’Brien in the ‘Outstanding Achievement’ category at the Horse Racing Ireland Awards earlier this month. Plenty people will tell you she was a victim of short-term memory.

Pointing that out is no reflection on O’Brien’s achievement in winning the Melbourne Cup. By any criteria, in any year, his feat in November was outstanding.

Cathy Gannon secured the equivalent apprentice crown on the flat in 2004. But Blackmore is a pioneering figure in terms of professional female jockeys, breaking new ground in the toughest game of all – riding over jumps in Ireland.

She was crowned champion having ridden 32 winners, vindicating her gamble in turning professional just over two years previously, aged 26.

For someone who’d struggled in the amateur ranks while studying for an Equine Studies degree at the University of Limerick it was reward for both talent and perseverance in a professional sport that had been widely presumed to be a male preserve.

And the obvious lesson for other women is that such presumptions don’t hold water anymore, especially since Blackmore’s career continues to thrive.

She has ridden 23 more winners so far already this season – including two on Limerick’s St Stephen’s Day card – and enjoyed perhaps the finest professional compliment of all in that it’s a rare individual who refers to her ability anymore in the context of gender.

As achievements go that’s outstanding by any measure. Every champion conditional subsequently faces the challenge of competing for a slice of the top action though. And there remains no better professional advertisement than big race success.

Blackmore won a €100,000 handicap hurdle on David’s Charm at Fairyhouse’s ‘Winter Festival’ earlier this month although attention was inevitably dominated on the day by a Grade One hat-trick for Michael O’Leary and Gordon Elliott.

Nevertheless, that her win got relegated in news priorities could be taken as a further compliment of the professional reputation she has carved out.

But there’s no disputing how the €190,000 Paddy Power Chase – the richest race of the Christmas action – assumes centre-stage on Wednesday.  Victory for Blackmore and Call The Taxie would be a timely advertisement for a jockey determined to take the next rung up the career ladder.

“This season is going well but these are the races everyone wants to win. It would be a massive deal. Any high-profile winner is good for anyone,” Blackmore says. “I think he goes there with a chance. He’s got plenty of experience for a race like this.”

Blackmore’s sex, and the new ground she was trying to break, guaranteed her media attention on the run-in to last season’s title. But gender makes no such distinction when it comes to ambition in the jockeys’ room.

She has also ridden three winners in Britain this season and says: “If there’s no racing in Ireland I’d love to go there if anyone wants me – the same as everyone.”

It perhaps explains why she’s uncomfortable referencing again French racing’s controversial decision in March to try and encourage more female jockeys by providing them with a 2kg allowance in most races.

At the time Blackmore’s attitude was that if anyone offered her such an advantage she wouldn’t turn it down. Now she’s less sure.

“With the French thing, I just don’t think we need it here,” Blackmore insists. “I don’t even think of it now. It’s old news.”

What isn’t old news is the struggle many women still face trying to make it as jockeys in Ireland. She might not like seeing herself being portrayed in pioneer terms but Blackmore’s success can only be an encouragement for other women coming in her wake.

“I went to RACE (apprentice school) last year and a lot of people on that course were girls. A lot of them intended getting going as conditionals or apprentices. It might take them a bit longer to establish themselves but they’re definitely there anyway,” she recalls.

It’s hard to quantify precisely the importance of a pioneering figure making footsteps for others to follow in.

But if young women are prepared to try and make it as riders now then it’s a safe bet the momentum of Blackmore’s success can only encourage more to try in future. And that can only be outstanding for everyone.

Alex Hales remains out in the cold as England name squad to face Ireland 15:23
Former Waterford boss Alan Reynolds joins Ireland Under-21 set-up 13:09
Chris Froome to join Dan Martin at Israel Start-Up Nation 12:51
When Clare’s hurlers climbed Everest and won Munster in 1995 12:15
Rafael Nadal: A mental giant who plays every point as though it’s his last 10:59
Here is your handy guide to sport on television this week