Gordon Elliott-trained horse is unbeaten in three starts over fences 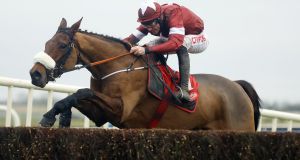 Davy Russell on Death Duty on the way to winning the Bar One Racing Drinmore Novice Steeplechase at Fairyhouse at the start of December. Photograph: Lorraine O’Sullivan/Inpho

Death Duty’s surprise inclusion in the Racing Post Novice Chase field sets up a mouthwatering clash with Footpad in the feature event on the opening day of Leopardstown’s Christmas Festival on St Stephen’s Day.

The Gordon Elliott-trained Death Duty is unbeaten in three starts over fences, completing his hat-trick with an assured display in the Grade One Drinmore Novice Chase at Fairyhouse earlier this month under jockey Davy Russell.

Elliott recently suggested a two-and-a-half-mile Grade Two at Limerick was Death Duty’s likely target over the festive period, but he instead runs over two miles for the first time since his bumper days.

Elliott said: “I made my mind up to run in Leopardstown. It won’t be easy as Footpad looks a very good horse, but it’s a Grade One and we’ll give it a go.”

The Willie Mullins-trained Footpad was fourth in the Champion Hurdle at last season’s Cheltenham Festival and could not have been more impressive on his fencing debut at Navan last month.

That foot-perfect display saw him rocket to the head of ante-post lists for the Arkle Trophy, but connections are not getting carried away.

Anthony Bromley, racing manager for owners Simon Munir and Isaac Souede, said: “I think we’ll all know a lot more after the race.

“Footpad has won a beginners’ chase and is now stepping up into a Grade One.

“Death Duty being in the race will tell us whether Footpad is a worthy Arkle favourite, or whether we should be aiming for the JLT, or neither.

“The owners already have Sceau Royal as a potential Arkle horse, so it will be interesting to see how Footpad goes.

“Willie tells me he’s in good form, so we’ll see what happens.”

The French bumper winner has won each of his three starts over hurdles since arriving in Ireland, most recently carrying the colours of leading owner JP McManus to an impressive victory in Grade Three company at Fairyhouse.

The son of Voix Du Nord must concede weight all round in this Grade Two contest, but will be a red-hot favourite to add to his tally under Mark Walsh.

Cromwell said: “He seems in good order order and we’ve been happy with him since Fairyhouse.

“Mitchouka is second-favourite and we’ve beaten him. He’s getting a few pounds of his this time, but hopefully our horse will be good enough to continue his winning ways.

“I don’t think the ground will matter to him either way.”

Fairyhouse runner-up Mitchouka is one of two runners for Elliott and Gigginstown House Stud along with French recruit Farclas, who makes his National Hunt bow.

Joseph O’Brien’s dual winner Grey Waters and the Charles O’Brien-trained Mastermind, a winner at Gowran Park a month ago, also feature in an eight-strong field.

1 Betting shops face uncertain future as they prepare for Monday reopening
2 Tianna Bartoletta: ‘After you’ve gotten your medal, you become black in America again’
3 Timo Werner giving up on Liverpool dream on path to being truly wanted
4 Kameko shocks Pinatubo in 2,000 Guineas at Newmarket
5 Sideline Cut: Marcus Rashford proves himself a leading man off the pitch also
Real news has value SUBSCRIBE