Leopardstown: ‘Awesome’ Footpad shows a clean pair of heels to the field 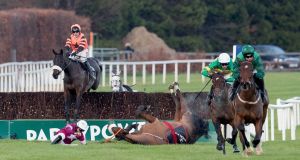 Paul Townend on Footpad on his way to winning The Racing Post Novice Steeplechase as Davy Russell falls on Death Duty at the last. Photograph: Morgan Treacy/Inpho

Footpad continued his ascent over fences with an impressive victory in the Racing Post Novice Chase at Leopardstown.

Willie Mullins’s inmate looked the real deal on his chasing debut at Navan last month but, if anything, he looked an even smarter animal in this Grade One over two miles and a furlong.

The five-year-old gelding gained a definitive lead four fences from home and simply did not look back.

Death Duty is certainly no slouch, yet he had little response when Footpad went about his business and ended up falling at the final fence when booked for third.

By contrast, jockey Paul Townend enjoyed an armchair ride on the victorious 4-6 favourite, who strolled home by a distance from Any Second Now.

Mullins said: “He’s electric. From the first day at home that I saw him jumping over fences I thought he was the best I’ve seen for a long while.

“He was good on his debut at Navan but today he was just awesome. He gained lengths at his fences and he’s one to really look forward to.

“I’d imagine he’d come back here for a similar type of race at the new Dublin Festival of Racing [Leopardstown, February 3rd-4th] and then, hopefully fingers crossed and everything stays right, on to Cheltenham.”

Townend said: “Riding a good two-mile chaser, going that gallop and jumping as well as this lad does, there’s no better feeling.

“He was jumping so well, I couldn’t disappoint him and take him back. We didn’t hang around, we went a proper gallop and he was doing it in his stride.

“He’s always jumped very well since day one and for his second start as novice, to jump as well as he did there, was deadly.

“He was doing it all so easily but he brings a very high level of hurdle form to the table so you’d be hoping that he could do that.”

Espoir D’Allen confirmed himself as the leading three-year-old in Ireland this season when extending his winning run in the Knight Frank Juvenile Hurdle.

Gavin Cromwell’s youngster was sent off the 1-2 favourite to remain unbeaten on his fourth outing over timber, and while rider Mark Walsh was briefly short of room on the run into the home straight, he got a dream split and travelled powerfully to the head of affairs.

Walsh was still sat motionless over the last, but so was Davy Russell on Mitchouka, although in the end it was Espoir D’Allen who quickened up best as he held off the fast-finishing hurdling debutant Farclas by a length and a quarter.

Cromwell said: “He’s a very straightforward horse, jumps great and is very professional for a juvenile, although he was a little bit keen early on today. He hasn’t missed any dance and has been busy enough for a juvenile.

“He’ll definitely get an entry back here in February [for the Grade One Spring Juvenile Hurdle].”

The JP McManus-owned gelding was was cut to 6-1 second-favourite from 10-1 for the JCB Triumph Hurdle by RaceBets, behind Nicky Henderson’s Apple’s Shakira in the same ownership.

Cromwell added: “He has taken it all well and hopefully Cheltenham is on the cards.”