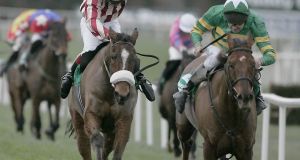 It’s 13 years since Conor O’Dwyer won a memorable Paddy Power Chase on Keepatem and that could prove a lucky coincidence when he saddles Go Darsi Go for Limerick’s Day Two festival feature.

Keepatem landed a huge gamble for JP McManus that day in 2004, providing O’Dwyer with just one of a litany of big-race victories during his long career in the saddle.

The former dual-Gold Cup and Champion Hurdle winner struggled for success at times during his subsequent training career but 2017 has seen a welcome upsurge in O’Dwyer’s fortunes.

Victory for Go Darsi Go in the €50,000 Tim Duggan Handicap Chase would put a fine seal on the year for the popular Curragh-based trainer and the horse’s presence alone in the race looks significant.

The Philip Reynolds-owned eight year old has only had the one race ever over fences and been assigned a mark of 130 on the back of what turned out to be an impressive success at Roscommon in May of last year.

His only starts since was over hurdles at Galway in October but he was prominent for a long way and this lightly raced sort should have sharpened up for that effort.

There was a lot to like about that Roscommon performance a year and a half ago and it’s a plus that Go Darsi Go has won on heavy conditions in the past.

The West’s Awake provided Edward O’Grady with an emotional victory at Punchestown on his last start and likes it around the Limerick track while Sumios Novios is a stalwart in these conditions.

It’s a very competitive 15 runner handicap overall but there’s no doubt who the dark horse of the race is. With Ricky Doyle taking 5lbs off Go Darsi Go’s back, the O’Dwyer runner could be a value priced option.

Crackerdancer gets her jumping career off to a start in a maiden hurdle on the back of an impressive bumper hat-trick.

The last of those was a Listed contest at Naas which saw Ray Hackett’s mare put up an admirable display, making most and beating off a series of challenges to win with authority.

Willie Mullins introduces another French recruit, Cut The Mustard, who won two bumpers for Louisa Carberry in France last year. The Elliott, Harrington and Meade teams are also represented in this race.

However if Crackerdancer was trained by one of the big guns she would be a very short price given her progressive profile.

Co Tipperary-based Hackett has conjured significant improvement in his stable start this winter and has already reported her jumping to be “deadly accurate”.

Double Portrait goes for Gordon Elliott in the opening maiden hurdle at Limerick and may be the one to beat. His stable companion, Suitor, was too good for the Mullins hope, Sympa Des Flos, when that one ran last at the track.