Members of winning club are family and friends of the late Nick Schuster, killed in Berkeley tragedy 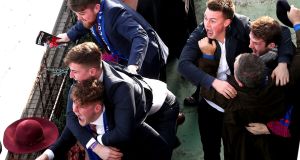 There were emotional scenes in the winner’s enclosure after the rank outsider, Ellie Mac, owned by the Niccolai Schuster Racing Club got the Christmas action off to a shock start in the opening maiden hurdle. Photograph: Bryan Keane/Inpho

Ellie Mac may ultimately never hit the heights yet rarely in racing history can there have been a more popular 50-1 winner than she was at Leopardstown on St Stephen’s Day.

There were emotional scenes in the winner’s enclosure after the rank outsider owned by the Niccolai Schuster Racing Club got the Christmas action off to a shock start in the opening maiden hurdle.

Later in the day Willie Mullins won the Leopardstown feature with the brilliant Footpad and Might Bite is 5-1 for the Cheltenham Gold Cup after his King George VI Chase success at Kempton.

But for many of the 13,412 festive crowd, it won’t be the spectacular Grade One action that lingers in the memory but Ellie Mac’s unlikely and jubilantly celebrated victory.

The almost 40 members of the winning club are family and friends of the late Nick Schuster, the 21-year-old UCD student who was one of six people killed in the Berkeley balcony tragedy in California in 2015.

The club was formed in memory of the “sports mad” student from Terenure and there was jubilation when the 50-1 heroine pounced in the closing stages of the first race of the festival. It was 20-year-old jockey Daniel Holden’s first ever winner.

“It’s an amazing story and I’m blown away to be honest,” admitted Ellie Mac’s trainer Henry De Bromhead who later completed a 4,334-1 hat-trick on the Leopardstown card.

“I’m just delighted for the Schusters. It’s such a sad story behind it but I’m delighted for them. John, Niccolai’s father, said he would have dreamt of having a winner here. It’s just one of those stories you’re delighted to hear about,” De Bromhead added.

Coming on the back of Killahara Castle’s record-breaking 200-1 success at Thurles just over a week previously, hardy holiday punters might have felt they had their work cut out. However, both of Leopardstown’s feature events went to the odds-on favourites.

Espoir D’allen won the Knight Frank Juvenile Hurdle for owner JP McManus at odds of 1-2 and there was never a doubt about Footpad justifying a 4-6 SP in the Racing Post Novice Chase.

“He’s electric. From the first day at home that I saw him jumping fences I thought he was the best I’ve seen for a long while,” said Mullins. “Today he was just awesome. He gained lengths at his fences.”

The champion trainer’s great rival Gordon Elliott was out of luck at Leopardstown but saddled five winners between the other St Stephen’s Day fixtures at Limerick and Down Royal.

There were no Irish runners in Kempton’s featured King George VI Chase which went to the 6-4 favourite Might Bite. Nicky Henderson’s star had a length in hand of the 50-1 shot, Double Shuffle.

Henderson also scored at Kempton with Buveur d’Air who is now a 13-8 joint favourite with Faugheen for the Champion Hurdle at Cheltenham in March.

English jockey Bryony Frost secured a Grade One victory in the Kauto Star Novice Chase aboard Black Corton. Her feat emulated another female rider, Lizzie Kelly, who won the same race in 2015.

The Day Two feature at the Dublin track is the €190,000 Paddy Power Chase, the Christmas festival’s richest prize, due off at 3.00.