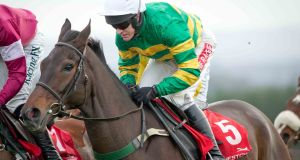 Gilgamboa: got back to winning ways at Down Royal. Photograph: Morgan Treacy/Inpho

Nina Carberry believes Gilgamboa might have rediscovered his mojo after he returned to winning ways at Down Royal.

Enda Bolger’s Grade One-winning nine-year-old had not tasted success since April 2015 prior to the Toals Bookmakers Hunters Chase.

But the 5-4 favourite competently redressed the balance with a three-quarters-of-a-length defeat of Venitien De Mai.

Carberry said: “He travelled very well the whole way and he jumped brilliantly. He’s still probably holding a little bit for himself, hopefully. Hopefully he can go again – he seems to have a little spark back. He’ll have to go up again in grade but he couldn’t have done it any better.”

Gordon Elliott took the training honours with a 326-1 four-timer.

Roche, 19, said: “That’s my first winner for the boss. My brother [jockey Leigh Roche] showed me the ropes and taught me.”

Al Boum Photo had led for a long way and was still going well enough in front when he dramatically came down in the hands of David Mullins.

Ring said: “That’s my biggest winner. I previously won a few big handicap hurdles but that is my first Graded win. That’s my second winner for Gordon and I ride out once a week for him.”

Of Dounikos, Ring added: “I had the other horse [Al Boum Photo] covered going down to the last. I was flying and he was such a good leaper – he gains two or three lengths at every fence.

“He’s an outsider but when you’re riding for Gordon that doesn’t really matter. He jumped and travelled like a winner everywhere and quickened down to the second-last and the last and had plenty left.”