Moments of the year: Beggy takes flight on Wings Of Eagles

It was no surprise perhaps that Aidan O’Brien won a sixth Derby. The horse and jockey certainly were 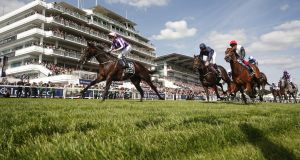 At 40-1, Wings Of Eagles was the longest priced Derby winner in 43 years. But that was nothing in the ‘Surprise Stakes’ compared to the presence of Pádraig Beggy on his back.

The 31-year-old Co Meath-born jockey had ridden just four winners in the previous two and a half years. As Wings Of Eagles flashed past the Epsom winning post it was, for many, a case of ‘Pádraig Who?’

It was tough to blame them. In terms of racecourse riding, Beggy barely reached journeyman status. Instead his role had primarily become that of work-rider at Aidan O’Brien’s renowned Ballydoyle stables.

Yet here he was winning the world’s greatest Classic on the fifth-string of O’Brien’s six Derby runners, beating the apparent first choice, Cliffs Of Moher, ridden by Ryan Moore, with Frankie Dettori on Cracksman back in third.

Even the normally unflappable O’Brien momentarily looked stunned. It was his sixth victory in a race so elite that for centuries it has defined the thoroughbred industry.

The Derby is so rarefied that truly great jockeys such as Joe Mercer and Christophe Soumillon have never won it. It famously took Gordon Richards 28 goes before he finally managed it. But Pádraig Beggy’s name is assured of its place in racing history.

As if the storyline didn’t contain enough romance it even had a redemptive element. Beggy only returned to Ireland in 2014 after getting a one-year ban in Australia for a positive cocaine test.

It was all wonderfully unlikely in its Hollywood movie element; the unlikely and unknown figure making the most of a once-in-a-lifetime opportunity and getting the better of two of the world’s top jockeys in the process.

Even more unlikely though were the circumstances of Wings Of Eagles’ final race a month later. He sustained career-ending injuries under Moore when third to Capri in an Irish Derby run in farcical circumstances at the Curragh.

The decision to keep racing at the Curragh with temporary public facilities during its two-year rebuild was controversial anyway.

But only when a 6,000 crowd limit conjured the absurd outcome of the public being pleaded with to stay away from the sport’s shop-window event did the insularity of Irish racing’s powerbrokers look so stark.

Ultimately only 5,412 turned up – and that included everyone on-site. The obvious move for a sport supposedly desperate for public attention was to switch the Derby to Leopardstown during construction.

However, those that count wanted to stay at the Curragh despite everything. And those who don’t wound up being told to stay away. You couldn’t make it up.

Johnny Murtagh to train for the Aga Khan in Ireland 16:40
Salwa Eid Naser cleared of anti-doping violation by World Athletics 16:38
Longford hand Cork a walkover in final Division 3 match 15:57
Johnny Sexton aware of how Ireland can offer fans an escape 15:34
Jason Holder ‘disappointed’ in Australia and Pakistan for not taking the knee 13:17
Here is your handy guide to sport on television this week