Thistlecrack and Cue Card set for showdown in King George 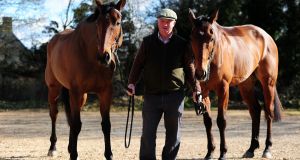 Trainer Colin Tizzard poses with Thistlecrack (L) and Cue Card (R) at Spurles Farm. The pair will go up against each other in the 32Red King George VI Chase at Kempton. Photo: Getty Images

Thistlecrack has been given the go-ahead to tackle stable companion Cue Card in the 32Red King George VI Chase at Kempton on St Stephen’s Day.

Trainer Colin Tizzard has been considering whether to let his star novice take on the best chasers around having won his first three races with the minimum of fuss.

The decision was ultimately left to owners John and Heather Snook, who confirmed they have always had the Christmas showpiece in their minds.

John Snook told www.somersetlive.co.uk: “It’s definitely the King George for Thistlecrack — it’s always been my intention to go that way provided the horse has been coping with jumping fences and we think he has.

“His win at Newbury on Hennessy day confirmed that — there was nothing wrong with that performance — and provided he’s 110 per cent on the day, we’ll be in the King George.”

Tizzard, who has had a tremendous first half of the season, will be bidding for back-to-back wins after Cue Card’s last-gasp success 12 months ago.

He added: “It’s John and Heather’s horse and as owners they have the right to say where he is going to run.”

Tizzard told At The Races: “We’d been saying for the last three weeks that we were going to leave the decision as long as we could, but we thought it was only fair that we told people what we intended to do.

“The owners want to go for the King George and I’m in full backing with it (the decision).

“Cue Card’s owners have sat down with Thistlecrack’s owners and they are both in agreement the King George is a once-in-a-lifetime race and both horses are in cracking form, so they should take their chance.

“Thistlecrack is eight coming nine, we know he can gallop and win a World Hurdle. He’s had three chases and last time his jumping was immaculate.

“Do we need to wait another year before we try to win a King George with him? The owners had the final say and they wanted to go, I fully support it.

“It would have been easier if Cue Card wasn’t in it, but he is and he’s in very good form so they can both go.

“He’ll probably school on Wednesday morning, maybe Cue Card as well. He won’t do any more just because he’s going for the King George, we’ve got a system that works quite well.”

Thistlecrack is not the only new addition to the King George frame as Gordon Elliott has also confirmed Outlander is under serious consideration for the race.

The eight-year-old joined Elliott from Willie Mullins in the autumn and while he has yet to win since making the move, he looked sure to collect in the Clonmel Oil Chase before falling at the last and lost little in defeat when second to Djakadam in the John Durkan at Punchestown.

With the 2015 Cheltenham Gold Cup hero Coneygree ruled out on Sunday, connections are tempted to run in Britain rather than stay in Ireland for the Lexus Chase on December 28.

Elliott told Betfair: “We’re sort of half thinking, with Coneygree now being out, that we might aim Outlander at it.

“Obviously Gigginstown (Outlander’s owners) have got plenty for Leopardstown (Lexus).

“He came out of his last race very well, so I’m thinking we might run him in the King George, all being well.”

Outlander is a 12-1 shot with 32Red, while the big-race sponsor makes Cue Card the evens favourite with Thistlecrack next best at 6-4.