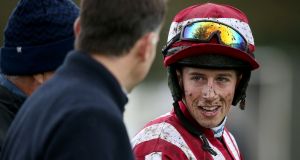 It represented a rare foray back to the limelight for Cooper, once lauded as a future champion, who enjoyed multiple big-race successes during three years as No.1 jockey to Michael O’Leary’s Gigginstown Stud operation.

Appointed in 2014 at just 21, Cooper tasted ultimate glory on Don Cossack in the 2016 Cheltenham Gold Cup only to lose one of the most high-profile jobs in the sport a year later.

It has been much leaner pickings since and Sunday’s victory was Cooper’s first at Grade Two level for two years since a brief period riding horses owned by the late Alan Potts for English trainer Colin Tizzard.

Injuries haven’t helped since then but for a man who rode 94 winners in Ireland during the 2015-16 season just half a dozen up to Sunday this term made for a paltry comparison.

If a sense of ‘too much - too soon’ lingered over Cooper’s early career then Latest Exhibition’s victory was a reward for perseverance after a couple of years that might be described as character-building.

“It’s been a bit quiet for me. Rides are tough to get in this country. There’s two or three jockeys in every place. I don’t think it matters what sort of CV you have nowadays.

“But hopefully this lad will bring on a few more and it couldn’t happen at a better time coming into Christmas,” he added.

Latest Exhibition’s performance was all the more admirable considering he rallied from a bad mistake out as Andy Dufresne cut out the pace.

He couldn’t shake off his market rival however and from the last Latest Exhibition’s stamina proved crucial.

“He’s a good sort. We went at it early because I knew he would stay well. We nearly fell down the back straight - he was lucky,” Cooper commented.

Luck is what the jockey has been lacking but Nolan has emerged as a stalwart supporter in the difficult task of taking on some of the game’s behemoth organisations.

“It’s great for myself and Bryan. He’s a multiple Grade One winning rider but we all need ammunition,” said the Wexford trainer who referenced a vital element in any jockey’s armoury. “As Noel Meade says, you can’t fill these lads with enough confidence.”

Both can realistically contemplate the Cheltenham festival with Latest Exhibition who was cut to 16-1 for the three mile Albert Bartlett by some layers. Cooper has had eight victories at National Hunt racing’s greatest festival in the past.

The outlook for Andy Dufresne is less clear. McManus was present to see his big-money purchase who folded tamely.

“He’s been beaten by a good horse but for me the third horse (Conflated) was coming too fast at him at the line for him to have run his race,” said Andy Dufresne’s trainer Gordon Elliott.

“We haven’t lost faith in him, he’s still a good horse: but they’re animals and it’s a sport - they get beat,” he added.

The opening maiden hurdle saw an even more expensive odds-on defeat as the 2-9 hotpot Blackbow crashed out when leading at the last.

It left Captain Guinness to come through for a winning debut under Rachael Blackmore for Henry De Bromhead.

The latter confirmed his stable star Honeysuckle won’t run over Christmas and instead warm up for Cheltenham in either the Irish Champion Hurdle, the Red Mills at Gowran or the Quevega at Punchestown.

Gordon Elliott was on the mark later with Run Wild Fred in a maiden hurdle but had his grip on the Listed Future Champions Bumper loosened as Uhtred maintained Joseph O’Brien’s recent run of form.

Three of O’Brien’s last five bumper starters have emerged on top and Sunday’s 5-4 favourite impressively added his name to a roll of honour that includes Samcro and Envoi Allen last year.

“He’s a bumper horse with gears and Tom (Hamilton) said he took off with him,” said O’Brien’s representative, Brendan Powell.

It’s been a hectic time for trainer Ross O’Sullivan and his wife, Katie Walsh, who recently celebrated the birth of a baby girl.

On Sunday O’Sullivan saddled An Fraoch Mor to dominate a novice chase under Robbie Power and predicted a bright future for the horse.

“I think he’s going to be a lovely staying chaser. Where he’ll climb to I don’t known but Katie has ridden him in all his work and she absolutely loves him,” he said.