Rachael Blackmore returns to action at Downpatrick after month-long recovery 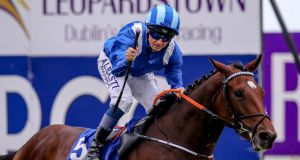 Madhmoon will try to gain revenge on his Epsom conqueror Anthony Van Dyck in the Dubai Duty Free Irish Derby later this month.

The Kevin Prendergast-trained colt came up half a length short of his rival in the Epsom Derby but both colts are set to clash again in the €1.5 million Curragh highlight in two weeks’ time.

Victory for Madhmoon would be a first success in Ireland’s premier classic for 86-year-old Prendergast whose legendary father, Paddy, won it on four occasions.

“There are only a few Derbies, the English, the Irish and the French and winning any of them would be a great boost,” Prendergast said on Friday.

“He [Madhmoon] has come out of Epsom very well and he seems in good shape. He stayed the mile and a half well at Epsom. He probably got there a bit too soon and became a cock-shot for the others. Hopefully that won’t happen next time,” he added.

Madhmoon’s owner Sheikh Hamdan could also have another Irish Derby contender in Rakan after Dermot Weld’s runner won at Listed level on his last start at Leopardstown.

Anthony Van Dyck is currently a 2-1 favourite to give Aidan O’Brien a 13th Irish Derby success.

O’Brien’s more immediate Group One focus is on Royal Ascot next week where he is odds-on to win the leading trainer award for a 10th time.

The champion has 63 Royal Ascot wins to his credit, second only to the veteran Sir Michael Stoute.

Seven of those wins have come in the Gold Cup – including Yeats’ unparalleled four in a row – and both Kew Gardens and Capri are set to step up to the marathon two and a mile trip for the first time next week.

“You can’t ever be sure a horse will stay. It’s an extreme distance and you never gallop them over that far obviously,” O’Brien said.

“While they obviously have to have stamina, they won’t win if they don’t have class. Capri won an Irish Derby and Kew Gardens the St Leger so hopefully they have that,” he added.

In other news, top jump jockey Rachael Blackmore returns to action after almost a month on the sidelines at Downpatrick on Saturday.

Blackmore sustained chest bruising in a fall at Clonmel four weeks ago but is due to be in action in seven races over Downpatrick’s two fixtures this weekend.