Dundalk racecourse to make surface decision in next two weeks 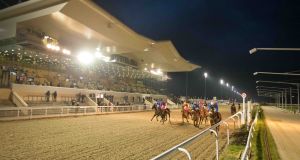 A decision on Dundalk’s new all-weather surface is expected within the next two weeks. Photograph: Morgan Treacy/Inpho

The board of Dundalk racecourse is expected to decide within the next fortnight as to what artificial surface will replace the current controversial all-weather track.

However indications from both firms who’ve submitted tenders for a job valued at an estimated €3 million appear to be that any new surface at Ireland’s sole all-weather course won’t be ready until the summer of 2020.

The current Polytrack was heavily criticised during the Spring with suggestions the 12-year-old surface had lost its ‘bounce.’

The Irish Racehorse Trainers Association indicated most of its members had lost confidence in it and a 2020 finish date for any work has caused concerns among racing professionals about a potential impact on Dundalk’s extensive winter programme.

Horse Racing Ireland’s chief executive Brian Kavanagh has urged any work to be carried out as soon as possible. Last month he didn’t rule out resurfacing being completed before the end of this year.

Crucial to all of it is deciding what surface is installed. Martin Collins Enterprises, which put in the original Polytrack a dozen years ago, is competing with the Tapeta Footings firm for the contract.

Dundalk officials are expected to deliver a presentation on the outcome of the tender process at its next board meeting later this month.

Tapeta Footings was established by the renowned former champion National Hunt trainer Michael Dickinson in 2005. It is the surface used at Newcastle and is a mixture of silica sand, wax and fibres.

A statement by Dundalk’s management stressed it will look at the issue in a careful and considered manner and will be mindful to give the winning contractor sufficient time to manufacture the complex surface used.

It also said the board will take into account favourable weather conditions required to best carry out the task.

Almost two months ago it was outlined how a finish date of May/June of next year would be the intended finish date for any new work and that timeframe still appears likely.

“Indications from both suppliers are indicating that is the optimum time for doing the job,” Dundalk’s chief executive Jim Martin said on Monday. “I can’t comment anymore because that is part of the discussions that will take place.”

Racing action resumes at Dundalk in September and the prospect of resurfacing not being completed for a year is likely to concern a lot of professionals.

The well known trainer Sheila Lavery said in April she is boycotting the circuit over safety issues.

Plans to add fibre to the current surface have already been outlined and Jim Martin added on Monday: “We have undertaken to carry out the work that was recommended in the summer and we’re confident the track is in good shape.”

1 Saudi Arabia-funded takeover of Newcastle United in serious doubt
2 Gerry Thornley: Home and away Six Nations could be its ruination
3 Net-tricks: How John McEnroe became the inner voice of a 15-year-old girl
4 Decision expected next week on staging of College Football game in August
5 RTÉ to start summer racing coverage with 1,000 and 2,000 Guineas
Real news has value SUBSCRIBE