Naas, Gowran Park and Tipperary have expressed interest in a new artificial track 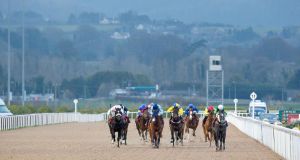 Horse Racing Ireland is evaluating half a dozen expressions of interest in the building of a second all-weather track in this country.

The board of Irish racing’s ruling body has established the terms of reference for evaluations and a recommendation on a winning proposal is expected in the autumn.

Three possible green-field sites have also been put to HRI whose director of racing, Jason Morris, is meeting with all interested parties.

In March HRI stated its ambition to have a new all-weather circuit in place by 2021. Estimates as to the cost of installing a new synthetic track run up to €10 million.

Currently Dundalk is Ireland’s sole all-weather facility and that has been dogged by controversy in recent months due to concerns over a lack of ‘bounce’ on the 12 year old Polytrack.

Later this month Dundalk officials are expected to make a decision on a resurfacing contract. However any new surface many not be in place until the summer of 2020 despite widespread industry calls for it to be carried out as soon as possible.

The HRI operated Tipperary racecourse is widely considered to be the favourite to get a new all-weather although a decision isn’t likely for some months yet.

“The whole thing is dependent on our overall funding position but we’ve set ourselves a timetable to be in a position to make a recommendation to the board by the autumn, ideally September, October at the latest,” Brian Kavanagh said.

“Their proposals are being considered by Jason Morris and his team and that process is ongoing. I wouldn’t underestimate the work put into these proposals, or what’s involved in evaluating the pros and cons,” he added.

Kavanagh also said HRI is awaiting the outcome of an upcoming board meeting at Dundalk where a decision is expected on what company will carry out resurfacing work and, crucially, when it will be finished.

“There is a board meeting on June 26th and we’re looking for a confirmed position from Dundalk on what they’re doing, when they’re going to do it, and what they might do during the summer in terms of remedial work if the work were not to take place until next year.

“We want to be advised formally what Dundalk’s position is and we’ll see what action of otherwise is necessary,” he said.

Last month Kavanagh said it was still possible Dundalk could be resurfaced before the end of this year.