Watering could begin at Leopardstown next week for Dublin Racing Festival 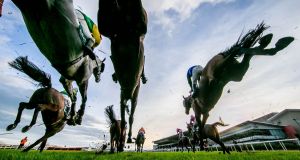 Action from the Christmas Festival at Leopardstown. Watering may be required for the forthcoming Dublin Racing Festival in early February. Photograph: Morgan Treacy/Inpho

Officials at Leopardstown have confirmed they are prepared to start watering the track next week if they feel it is necessary ahead of the upcoming Dublin Racing Festival.

There have been widespread calls for watering to take place at the Dublin course to ensure soft ground conditions for the two-day €1.8 million showpiece event which takes place on February 1st and 2nd.

Last year’s Dublin Racing Festival was decimated with non-runners after 22 horses were taken out on day two alone due to ground conditions. They included six of the 10 declarations for the featured Irish Gold Cup.

The question of unusually quick mid-winter ground conditions arose again at Leopardstown on the final day of the recent Christmas Festival.

The Grade One Neville Hotels Novice Chase was reduced to just three runners after three of the original seven declarations were taken out due to the going on the steeplechase track.

It allowed Battleoverdoyen to lead home a Gigginstown Stud one-two.

Since then Ruby Walsh and Noel Meade have been among those urging the course to ensure safe jumping ground by watering.

On Tuesday, the new chief executive of Leopardstown, Tim Husbands, said: “Repair work on the track after Christmas racing is currently being undertaken this week. We are assessing the track and rainfall on an ongoing basis and are in a position to commence a structured programme of watering next week should it be required.”

The going at Leopardstown on Tuesday was soft on the chase course and yielding in places. The hurdles circuit was soft and soft to heavy in places.

Over the years Leopardstown has been renowned for providing a quicker surface than other racecourses even during the depths of winter.

However the problem of unseasonable ground has arisen with other tracks this winter including at Naas where selective watering took place before it’s  Grade One card on Sunday.

Watering is unlikely to be needed before this Sunday’s Punchestown programme which features the Grade Two Sky Bet Moscow Flyer Novice Hurdle.

Nevertheless officials there believe watering is an option that is increasingly becoming necessary due to changing climate conditions.

“Our view at Punchestown is the same as everyone else’s. The seasons and the climate is changing whether we like it or not. If we don’t try and provide ground that attracts, and is safe for, midwinter National Hunt horses they’ll stop coming, irrespective of whether it’s January or June,” said spokesman Richie Galway.

“It doesn’t look like being a factor this weekend but it was a factor for us on New Year’s Eve when we watered in advance of that meeting. We selectively watered the hurdles track the day previous to New Year’s Eve.

“It’s strange and unforeseen but we discussed it and came to the conclusion we had to ignore the fact it was December. When ground conditions required it then it was the right thing to do.

“What makes it slightly easier for us is that we have flexibility in that we’re not racing on that ground again until next season. I wonder if that is something other tracks will able to do,” Galway added.

He said the only previous time some watering was necessary during winter months at Punchestown was two years ago ahead of the Morgiana Hurdle fixture.

“We’ve never before had to have a conversation about watering in December and January. Up to a couple of years ago it would have been about whether or not we were raceable. You’d get to November and the going description was very simple. It was either soft or heavy.

“It’s a change of mindset but also a change of circumstances. Irrespective of mindset, up to last year when have you ever seen good to firm anywhere – Leopardstown even – in January?

“Circumstances have definitely dictated the requirement for a change of mindset,” Galway said.

An unsettled weather outlook later this week means watering is unlikely to be required for Sunday’s card which sees Gordon Elliott with a strong hand in the feature event.

The Christmas Grade One winner Abadacabras is among a dozen entries left in the Moscow Flyer which Elliott won last year with Felix Desjy.

Other Elliott possibles are the Limerick winner Easywork and the JP McManus owned Andy Dufresne who lost his unbeaten record at Navan last time when runner up to Latest Exhibition.

“Both Easywork and Andy Dufresne ran over two and a half miles last time but they could easily come back in trip.

“I was impressed with Easywork at Limerick and he looks quite exciting. Andy Dufresne got beaten by a very good horse of Paul Nolan’s last time and he’s been in good shape since then. The way he jumps and travels, two miles should be no problem for him.

“We’ve also given Abacadabras an entry and we’ll just see how the horses come through their work this week and make a decision on who goes where,” said Elliott.