Irish still on course to to rule the roost at Cheltenham 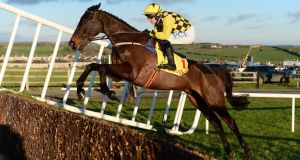 The end of the Irish travel ban this weekend should bring with it the end of fears that Covid-19 could somehow prevent Irish runners from lining up at the Cheltenham Festival in March. While those concerns were natural amid the worrying news and fast-changing rules of the past fortnight, I understand senior figures in the sport in Ireland regard the real risk as being essentially nil and are inclined to think of the issue as a non-story.

Ireland’s ban on inward travel from Britain was extended by another 48 hours on Wednesday but will end at midnight on Friday, making travel between the two countries possible once more, albeit subject to heavy restrictions. It appears the change will come just too late for the runners Gordon Elliott had hoped to send to Chepstow on Saturday. Most bookmakers have now removed his unbeaten pair, Quilixios and Duffle Coat, from betting on the Finale Juvenile Hurdle, for which they had been available at 9-4 and 4-1 respectively.

However, it is expected that Horse Racing Ireland’s advice to trainers will change with the end of the travel ban, so that Irish trainers will once more be allowed to send runners over to Britain. Staff who travel over with the horses will clearly have to comply with the restrictions being imposed from Saturday, requiring a negative PCR test for Covid-19 at the point of re-entry into Ireland, followed by a period of self-isolation.

That need for self-isolation means the new restrictions are a headache for Elliott and Willie Mullins, who are both in the habit of bringing several-dozen runners to each Festival, the two of them combining to win half of all races in that week last year. Those horses take plenty of looking after and it hardly seems likely the meticulous pair would entrust care of their stars to British-based hirelings for the sport’s biggest week.

Any staff returning from Britain could be prevented from working for as long as a fortnight, creating a late-March headache for Elliott and Mullins, who will also have large numbers of horses to be prepared for spring meetings at Fairyhouse, Aintree and Punchestown. But does anyone imagine that will stop them making determined raids on Festival races?

Conceivably, it may sharpen their focus, so that they leave at home any horse whose chance was no more than speculative. Surely there will be no ‘social’ runners from Ireland at this Festival. There will be fewer visitors but the ones who come over will demand respect.

Alarmed speculation caused by the travel ban, introduced in the days before Christmas, has included a back-page story in an Irish tabloid in recent days. Some punters have considered whether it might create a betting angle in races like the Mares Hurdle, for which the top three in bookmakers’ lists are Irish-based.

But, as things stand, such talk seems unjustified. One insider summed it up: “It must be a quiet week.” - Guardian