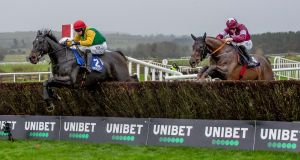 Racing’s St Stephen’s Day social ritual is going to be a much more sombre exercise in being thankful for small mercies this Christmas.

Rather than up to 100,000 people cramming into Leopardstown and Limerick over four festival days the sport continues behind closed doors due to coronavirus. The impact to both tracks of staging such a hollow experience on the ground will run into millions.

Even in the face of a third wave of Covid-19, losing the Christmas tradition of going racing will feel like another sharp reminder to many of how dreadfully unique the circumstances of 2020 have been.

For Dubliners in particular, Leopardstown on St Stephen’s Day is a cherished tradition.

But in the context of so much else, the fact racing continues at all, despite the absence of everything else that goes on around it, will still feel like the most important result of all this weekend.

Given the wider state of affairs it’s almost reassuring to know other Christmas festival habits are still unaffected, such as close examination of what the likely ground conditions will be at Leopardstown. After torrential rain into Wednesday, the going on the steeplechase course remained only ‘yielding’.

With 10mms more predicted to fall prior to the start of Saturday’s action, it means expectations of having to water the chase track look off the mark.

However conditions still look likely to be better on it than almost any other piece of grass in the country.

That could be good news for Gordon Elliott who enjoyed a vintage 2019 Christmas at Leopardstown, winning four of the seven Grade One races up for grabs there, not to mention the big handicap, the Paddy Power Chase.

A Grade One winner over flights, Felix Desjy is ground adaptable as he proved when making it two from two over fences by winning a Grade Two at Punchestown last month.

However it’s hard to think a horse capable of previously winning on good ground at Killarney, and who started favourite for the Galway Hurdle, would relish ultra-testing winter conditions.

Against just a handful of opponents his freewheeling run style could allow jockey Jack Kennedy dominate the tempo from the outset.

In form terms it’s hard to knock Felix Desjy. Sizing Pottsie, runner-up at Punchestown, has won a good handicap since and the one most bookies reckon is his main threat, Darver Star, was back in third.

A better performance from Darver Star, good enough to be placed in a Champion Hurdle after all, can be expected.

However Felix Desjy has looked exciting since being put over fences and holds excellent claims for maintaining an unbeaten record over fences.

Elliott also looks to have the likely favourite for Saturday’s other black-type contest, the Grade Two Knight Frank Juvenile Hurdle.

Zanahiyr is two from two since switching from the flat and was hugely impressive when running away from Saint Sam at Fairyhouse’s Winter Festival four weeks ago.

Owners Noel and Valerie Moran are among the biggest new investors in the sport and look to have a proper Triumph Hurdle contender.

There were 14 lengths back to Saint Sam at Fairyhouse where it didn’t look like Zanahiyr would have needed to exert himself too much to stretch even further clear.

With Paul Townend on duty at Limerick, David Mullins has the task of trying to bridge the gap on Saint Sam who will get 3lbs on this occasion.

So will the other Willie Mullins hope, Ha d’Or, a bumper winner in France, who has the assistance of Rachael Blackmore.

The impression Zanahiyr made last time out makes him impossible to oppose with confidence.

A noon start to Leopardstown’s action sees Micro Manage – who ran off an impressive flat rating 107 in the Irish Leger last time – begin his jumping career in a maiden hurdle.

Later One Cool Poet, who won three times in a week at the Galway festival last year, could be a standout off a jumps mark of just 102 in a novice handicap hurdle. Two recent runs on the all-weather should see him sharp enough although Big King might still put it up to him.