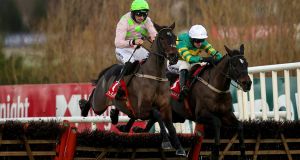 Patrick Mullins on Sharjah (left) on the way to completing a Matheson Hurdle hat-trick at Leopardstown on Tuesday. Photograph: Tommy Dickson/Inpho

Sharjah put himself in elite company when completing a Matheson Hurdle hat-trick at Leopardstown on Tuesday.

Champion amateur Patrick Mullins guided the 11-2 shot to a third win in a row in the final day highlight of Leopardstown’s Christmas festival.

Sharjah emulated two of the great names in modern racing history, Hurricane Fly and Istabraq, who also completed hat-tricks in the €100,000 contest.

If it seems Sharjah’s lot to struggle for public acclaim against contemporaries – never mind iconic horses of the past – it hasn’t prevented him appearing all but unbeatable at Christmas around Leopardstown.

Despite that he once again got largely ignored on the run-in to a clash of most of Ireland’s top Champion Hurdle contenders.

Stable companion Saint Roi started a 13-8 favourite but the ‘buzz’ horse once again ran free and petered out into fourth.

With Abacadabras also failing to fire the race looked teed up for Aspire Tower to keep his advantage at the front until Mullins launched Sharjah with a familiar late run on the outside.

A brief skirmish on the run-in was all that Aspire Tower could manage as he came up two lengths short.

“He’s like Santa – he rocks up here every year and always seems to deliver!” said the winning jockey.

Considering Sharjah’s CV also contains a Morgiana and a memorable Galway Hurdle off topweight his supporters are entitled to view him as being woefully lacking wider appreciation.

Even on Tuesday he found himself sharing the Grade One spotlight with his stable companion Monkfish, who made it two from two over fences in the Neville Hotels Novice Chase.

He’s starting to generate the sort of public excitement that Sharjah struggles to despite a CV that also includes chasing home Epatante in last season’s Champion Hurdle. He was cut to 8-1 to go one better in March.

“He has the odd off day and that’s maybe why he gets forgotten about sometimes because he’s not hugely consistent,” added Patrick Mullins.

“On his day he’s as good as any of them. Last year in the Champion Hurdle there was a big field and we didn’t go a huge gallop. In a normal year with a smaller field that might put me four or five lengths closer for nothing. Would that make me win the race? You’d have to believe that.”

Willie Mullins agreed and said of the most valuable of his four winners on Tuesday’s Leoaprdstown programme: “He’s showing us now he’s a real class act.”

He added that Sharjah will return to Leopardstown for the Irish Champion Hurdle in February at the Dublin Racing Festival, a date set to feature a host of other Mullins stars including Monkfish.

If Envoi Allen is the ultimate ‘buzz’ novice of the season then Monkfish isn’t far behind him.

With the likelihood that they won’t clash at Cheltenham, Monkfish is as 15-8 favourite for the race formerly known as the RSA.

That his old rival Latest Exhibition was cut to 7-1 for the same contest on the back of Tuesday’s clash indicated they delivered a race for the purists at Leopardstown.

Having jumped the last together, Monkfish had three lengths in hand at the line and gave the impression of real authority too despite it being just his second start over fences.

“It didn’t seem to be a problem. Even when he was meeting one wrong he shortened himself. He seems to be a natural over fences,” said the trainer.

“There was a lot of pressure on him going to the last with Latest Exhibition who has a bit more experience than him. He pulled himself together, fought his way over and had a bit in reserve.

“I’d imagine we’ll look at the Flogas Chase [Dublin Racing Festival]. We’ll focus on that first. If all goes well we can look at Cheltenham after that.”

Concertista continued her rapid progress with an odds-on Grade Three success on Tuesday despite having to concede weight all-round.

“She was very brave and very good to do what she did there. I’d imagine the Mares’ Hurdle [Cheltenham] is the target. She’d look nicely positioned for that race We’ll come back here first for the Dublin Racing Festival,” Mullins reported.

The Mullins four-timer opened with Stattler breaking his duck over hurdles for jockey Paul Townend.

4 Brighton edge towards safety after stalemate with depleted Everton