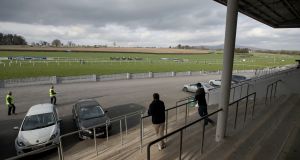 A view from the stand in Clonmel during Tuesday’s meeting. Photograph: Bryan Keane/Inpho

Horse Racing Ireland has described as “potentially catastrophic” the impact of a sustained period without racing on all sectors of the thoroughbred industry.

The board of Irish racing’s ruling semi-state body met on Wednesday in the aftermath of the government’s decision to cancel all sporting events until at least April 19th as part of the struggle against the coronavirus pandemic.

Racing here had been taking place behind closed doors since Friday week last.

The HRI board agreed that a series of measures to support the financial, physical and mental wellbeing of those in the industry is necessary.

It also underlined its full and ongoing support for and commitment to Government efforts to fight the transmission of Covid-19.

HRI pledged the input of racing’s personnel and infrastructure to assist as necessary and confirmed that the HSE has begun preparations to use Cork racecourse as a testing centre for the virus. The centre is set to be operational from Thursday.

“Horse Racing Ireland will be working with the HSE and the Government to identify other elements of racing’s personnel and infrastructure that could be used in the co-ordinated reaction to the crisis,” said the board’s chairman, Nicky Hartery.

HRI operates four of the 26 racecourses on the island of Ireland – Leopardstown, Navan, Tipperary and Fairyhouse.

The latter track had been due to host the Irish Grand National on Easter Monday which falls before April 19th.

HRI estimates the racing and breeding industries support almost 29,000 jobs and there is widespread unease about the prospect of any ban extending beyond the deadline in just over three weeks’ time.

“We will continue our engagement with Government around the supports that are available for the many people in our industry who have now lost their jobs and whose earning capacity has drastically reduced.

“As of yesterday’s stoppage many others including jockeys, trainers, stable-staff, media, and many other service providers joined that list.

“In the long term a cessation of racing has major financial implications for racecourses, sales companies, breeders and betting organisations such as Tote. Supports will be necessary for each of those areas and HR will work with all parties to achieve this,” Kavanagh added.

He said the experience of running 10 meetings behind closed doors over the last fortnight could assist a return to racing as soon as possible.

“What this has proven is that race fixtures can be safely staged while at the same time offering some level of business continuity for a crucial industry,” Kavanagh said. “For the immediate future however there are more important priorities.”

Hartery said the country is facing an unprecedented public health crisis and also pointed to anxiety around the worsening economic situation.

“We are very aware that the thousands of people in our industry are facing into a great deal of uncertainty over the coming week and months.

“Rest assured we are working on your behalf with the Government to put in place the supports necessary to get you through this crisis and back racing again as soon as we are able.

“Irish racing is an resilient sector and we have come through previous challenges such as foot-and-mouth disease and equine influenza. This is perhaps our greatest challenge but working together we will come through this too,” he added.

1 Dan Leavy gets back in the thick of things as Leinster trounce Zebre
2 Old failings come back to haunt Ireland in Kiev as Ukraine take the points
3 Jackie Tyrrell: Winter is here and a machine-gun Championship awaits
4 Colin Byrne: Hard to understand how golf has become the bogey man now
5 Patrick Bamford nets hat-trick as Leeds ruin Aston Villa’s summit ambitions
Real news has value SUBSCRIBE