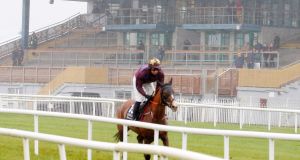 Ireland’s racing authorities have opted to keep racing behind closed doors despite the coronavirus pandemic.

The board of Horse Racing Ireland decided on Wednesday that the sport can continue here although with extra restrictions applied.

In a statement it said the decision was motivated by the need to maintain employment and incomes for people working in racing. HRI also said it was on the basis of achieving and maintaining all HSE advice and instructions.

“We have consulted with the Department of Agriculture, Food & Marine throughout this process and we will continue to strictly adhere to the government and HSE advice.

“We have made it clear at all times that our medical facilities and personnel will be available for the government to use if necessary,” said HRI’s chairman Nicky Hartery.

A minimum of two ambulances are required at every race meeting. They are provided by the Order of Malta in a contractual arrangement with HRI.

Wednesday’s move is at odds with every other major racing jurisdiction in Europe.

On Tuesday British racing was closed down until May. On Monday France’s racing authorities shut the sport down there until April 15th at the earliest. Germany has also stopped racing due to the Covid-19 crisis.

In contrast racing has continued to take place with restrictions in place in other major racing centres such as Hong Kong and Japan.

Irish racing has been taking place behind closed doors since last Friday with five meetings having taken place since then.

Restrictions on access to tracks, and social distancing requirements inside them will continue, but with extra measures put in place in time for the next meeting at Dundalk on Friday.

That programme will be staged in the afternoon as no evening fixtures are now allowed. In order to reduce the draw on medical resources there will be no more than one fixture a day. The immediate impact of that is that the start to the 2020 flat season on turf at Naas will move to Monday.

There are 10 fixtures in Ireland between now and March 2th

No owners will be allowed attend race-meetings and no overseas runners will be permitted. Intervals between races can be no more than 30 minutes in order to assist social distancing.

With no saunas allowed on-track, the weights jockeys carry will increase by 2lbs. A sub-committee will review the situation on a daily basis.

The Irish Jockeys Association has already said it is “inevitable” one of its members will test positive for Covid-19.

So given the rates of infection are forecast to soar in the coming weeks, and with self-isolating guidelines in place, the decision to continue racing here could become academic sooner rather than later.

HRI has also stressed their move – contrary to Britain and France – has got the blessing of government which is keen to keep employment going at a time of mass layoffs.

Not surprisingly the decision to keep racing has been widely welcomed within racing itself.

However there is an inevitable likelihood the step will strike many among a wider public facing into the prospect of an existential struggle against Covid-19 as spectacularly tone-deaf.

On Tuesday night, Taoiseach Leo Varadkar broadcast to the nation and predicted the emergency will go well beyond March 29th with the number of Covid-19 cases reaching 15,000 in the coming fortnight.

Official forecasts have been made about hundreds of thousands of positive coronaviurs tests potentially down the line.

If most industry professionals feel this is a good short-term outcome keeping the show on the road, the reputational damage to a sector already not exactly flavour of the month has the potential to linger for much longer.

Racing’s image took a battering over last week’s Cheltenham festival going ahead. That, ultimately, was a call as for the British authorities. This decision is Irish racing’s to own all by itself.

HRI’s chief executive Brian Kavanagh rejected any suggestion that it would jar among a wider public which has seen every other major sport close down due to the conronavirus threat.

“People in racing are concerned about the current situation too so it’s not about some separate sub-population. The protocols are generally accepted as good and safe and applied in other areas of business and activity.

“This is an industry. The wheels need to keep turning. If racing stops, people stop earning almost immediately.

“The horses still need to be exercised. It’ s not like trainers can tell staff to work from home or go home and phone in. That’s going on anyway. The purpose at the end of that is that racing takes place.

“The board took all those into consideration. They had a long discussion on it. It’s a measured decision and they have approached this on a very logical basis,” he said.