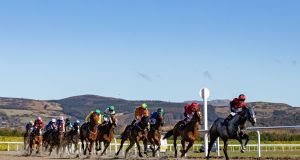 A view of Friday’s racing at Dundalk. Photograph: Tommy Dickson/Inpho

The decision to continue racing behind closed doors sees Thurles in the unlikely position of having European sport’s live spotlight almost entirely to itself on Saturday.

A total of five races from the only race meeting taking place on the continent will be broadcast on ITV4.

With all other major sports called off due to the coronavirus pandemic – including racing in both Britain and France – the Irish decision has been hailed as an “oasis in the desert” by the betting industry.

On Sunday another of Ireland’s more ‘shop-floor’ tracks, Downpatrick, is also set for an improbable moment in the limelight.

Earlier this week Horse Racing Ireland announced further restrictions that allow the sport continue here – with Government backing – in the face of the Covid-19 crisis.

However, point-to-point racing this weekend has been called off due to the difficulty of enforcing a “behind closed doors” policy.

“It is the considered opinion of the stewards that it may not be practicable in all respects to adhere to the strict social distancing protocols required, as will be enforced for all fixtures being staged at racecourses,” an Irish Horseracing Regulatory Board statement said.

There has been widespread support within racing for HRI’s decision to keep racing, although it is proving contentious elsewhere.

The TD and Labour party leadership candidate Aodhán Ó Ríordáin has described as “extremely regrettable” HRI’s failure to suspend racing and he called on the semi-state body to change its position.

“In the aftermath of the Cheltenham controversy I would have thought that the magnitude of the emergency facing us would be obvious to everyone in the horse racing industry but clearly that is not the case,” he told RTÉ.

Dundalk on Friday afternoon was the first meeting run under the new measures which include not allowing owners on-site.

The all-weather Flat fixture was staged early as part of HRI’s new guidelines that rule out evening dates.

The atmosphere of racing behind closed doors was once again described as “eerie” but James Lambe, who won the opening race with Reverberation, said: “It’s good to get it in these difficult times and let’s hope we can just keep going.”

HRI’s chief executive Brian Kavanagh said the prospects of racing continuing will be reviewed on a daily basis and defended the decision to not close down.

“We’ve set our stall out in terms of the reasons we’re doing this and the circumstances in which we’re able to do it.

“The first thing is, is it safe to do it? Yes is the answer. There is a safe environment on the racetrack. Strangely enough they’re really suited to social isolation when you have no on there.

“Secondly is there an economic reason? The answer is yes, because it is keeping people in jobs,” he said on Friday.

Asked how long racing can continue, Kavanagh added: “To some extent it’s in the lap of the gods in terms of what happens in the broader environment with this disease.

“That’s the first priority in terms of safety and health. At the moment the medical resources we use are not needed. If that changes we will take stock again. I’m not going to put a time on it. Our desire is to create a safe environment that will allow us continue racing as long as it is safe to do so.”

HRI’s top official said there has been demand for pictures from overseas Tote operators starved of markets for punters to bet. However, he said this doesn’t represent an opportunity for the sport here.

“I don’t think it’s an opportunity. I think it is probably good that there is some sporting action for people to be distracted by but it’s not racing as we know it. I wouldn’t call it a normal race meeting.

“You’d prefer to have other sports back sooner rather than later. So I don’t see it in any way as an opportunity.

“It’s a very unique situation. It’s amazing that Thurles is the only race meeting on and the only sporting action on,” he said.

“UK high street shops are still open. Online betting is still operating and I know there have been some enquiries from overseas Totes as to taking the signal of Irish racing. But what that materialises into we won’t know until after Sunday really.

“Before, when the weather meant UK meetings were cancelled, Irish turnover went up but that’s a side issue. Whatever happens there happens. It’s a side issue,” he added.

1 Munster braced for worst of financial crisis due to Thomond Park debt
2 Seán Moran: Horan’s cautious approach under growing pressure
3 From history to food: Players take chance to focus on life after rugby
4 When the action stops, sports photographers think outside the box
5 Gerry Thornley: Home and away Six Nations could be its ruination
Real news has value SUBSCRIBE