Coronavirus: Simon Harris says couple ‘coughed’ on him before running off 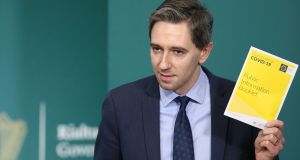 Health Minister Simon Harris has said he was targeted by a couple who coughed at him before running off laughing.

The minister said there appeared to be a social media “game” involving people coughing in the face of older people and videoing it. He said such behaviour must be dealt with using the full rigours of the law.

The Garda has received several reports of young people coughing on passersby since the beginning of the coronavirus outbreak, but has stressed it does not believe it to be a widespread problem.

Mr Harris told a coronavirus press conference at Government Buildings in Dublin on Wednesday: “This happened to me yesterday as I was walking from here to my department and a man and woman on a street thought it was hilariously funny to come up and cough at me out loud and then run off laughing.

“Can we please as people look at what’s happening in Italy and elsewhere in the European Union, where we’re seeing several hundred people a day dying of a virus that can be deadly to certain people in our population?”

He said: “There seems to be some sort of social media game going on but it’s not a game, it’s disgusting.

“It is generally older people who are targeted by people who will go up and cough in their face, video it, have a laugh and then run off. Just think if it was your own granny, granddad, mother, father, your own friend with an underlying health condition like cystic fibrosis.

“The Irish people have been absolutely amazing in relation to this national challenge we’re all going through. But anything that takes off on social media will have to be dealt with the full rigours of all of the powers the State has.”

The minister added there was “absolutely nothing amusing about it. It’s quite pathetic”.

Asked about the trend, a Garda spokesman said the force was aware of “ongoing social media reports in relation to person engaged in coughing at persons”.

Such behaviour would be an offence under the Public Order or Non-Fatal Offences against the Person Acts, the Garda said.

“An Garda Síochána will treat any reports of this type of activity seriously.”

It also requested the media not to “inadvertently propagate social media myths or fake news at this time”.

On Monday a teenager in Waterford was arrested in suspicion of coughing onto other people on purpose. The boy was detained under public order legislation.

There are also reports of an elderly couple in Kildare being targeted by a man who coughed in their face.

In Dún Laoghaire on Tuesday, gardaí told a group of youths on the pier to disperse and arrested one male who verbally abused a garda. However there was nothing to support allegations on social media that the group was coughing on passers-by, a spokesman said.

Senior counsel Garnet Orange said there were a range of offences which could be used to prosecute those who purposely coughed on others during the coronavirus crisis.

“It may be possible to bring charges under Section Two of the Non-fatal Offences against the Person Act, that carries up to 12 months in the District [Court].”

The offence has been used before in similar cases. In 2017 a man was jailed for two months for assault and violent disorder after spitting in a garda’s mouth and claiming to have Aids.

In the UK on Wednesday, a man who coughed on police officers after claiming to have Covid-19 was charged with common assault.

Charges of endangerment could also be considered if the accused actually has Covid 19, Mr Orange said. Endangerment comprises intentionally or recklessly engaging in conduct “which creates a substantial risk of death or serious harm to another”. It is punishable by up to seven years in prison.

Likely the most serious charge which could be brought is what is commonly known as Section 4 assault, or intentionally or recklessly causing serious harm. This is punishable by up to life in prison.

In 2018, the offence was used to prosecute a man accused of having unprotected sex with two women while knowingly infected with HIV. He received a 10- year sentence.

Separately, On Tuesday, Fianna Fáil TD for Kildare North TD James Lawless called for the full extent of the law to be used against anyone deliberately coughing or spitting in the faces of other people.

He expressed concern and disgust that small numbers of young people were coughing into the face of other people as well as filming it and posting footage on the social media app, TikTok.

Other versions of what has been branded the “Corona Challenge” have involved people engaging in reckless hygiene practices.

Mr Lawless said he had been told of separate incidents in Newbridge and Naas, Co Kildare in the past few days where elderly women were approached by a member of a small group of youths who coughed in their face before mocking them that they had the coronavirus.

The TD said he understood that one of the incidents may also have been recorded.

“This really is too serious to be explained with a ‘boys will be boys’ attitude. People are desperately frightened of these thugs who are laughing and jeering about having Covid-19, while coughing directly into people’s faces,” Mr Lawless said.

Mr Lawless said he intended to propose an amendment in a Dáil debate on Thursday on new emergency powers for the Government to deal with the Covid-19 pandemic which would address the issue.

1 Ireland has strategy to ‘break the chains’ of coronavirus - WHO’s Mike Ryan
2 ‘Everyone still thinks it’s a joke’ - parents of toddler with coronavirus speak out
3 UK makes another coronavirus U-turn but doubts over strategy linger
4 Some protection equipment from China ‘not ideal’, HSE says
5 Coronavirus: Almost 100 staff and residents in one nursing home test positive, Dáil hears
Real news has value SUBSCRIBE