Driver theory tests to be suspended over coronavirus 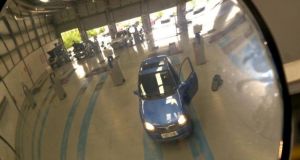 The RSA has asked drivers to bring their cars to NCT centres. Photograph: Dara MacDonaill

NCT centres are to remain open and drivers should continue to bring their vehicles in for testing the Road Safety Authority has said.

Driver theory tests will not continue however, as the company providing that service for the RSA has said it is not in a position to operate “while adhering to HSE guidelines on social distancing”.

In Northern Ireland, the Driver and Vehicle Agency has suspended testing for three months, with the exception of taxis and vehicles that carry dangerous goods.

Vehicles in Northern Ireland are to be issued with a three month temporary exemption certificate.

The agency said the measures were “ necessary precautionary measures to protect staff and customers and adhere to public health authority guidelines on social distancing” .

However in the South, the Road Safety Authority said the maximum amount of time between tests, once a car was more than four years old, was two years. “In the North they test every year, so they could extend the period for up to another year if they wanted. But in the South we test only every two years, so we have no room to extend the testing period” a spokesman said.

He added that the rules were dictated by EU regulations and “there has been no clarity from the EU” on relaxing those rules.

However, in the South the Road Safety Authority said it was “satisfied that all necessary precautions have and continue to be taken” by Applus+ , the company that operates the NCT service.

The RSA said it was “in regular contact with Applus+ to monitor the situation and we will be looking for reassurances that any additional measures to comply with the latest Government guidelines are put in place.”

“Specifically, we would urge customers attending for a car test to please follow the instructions being given by the NCT service prior to their visit” the RSA added.

* Only a small number of customers will be allowed into the waiting area at a time.

* Customers to refrain from bringing children with them to the test centres.

* Once checked in, owners should return to their car and leave the windows slightly down to allow for natural ventilation before the vehicle inspector gets into the vehicle, and wait until advised when it is their turn to enter the building.

* Customers should ensure their vehicle is clean, tidy and free of any unhygienic matter such as used tissues and wipes

The company said it was also asking any customer who has been exposed to the virus or who has knowingly been in contact with anyone showing symptoms, “that they don’t visit the NCT centre and in this instance follow HSE advice”.

The National Car Testing Service previously differed from the service provided in Northern Ireland, in relation to lifts which were taken out of service due to the discovery of cracks in vehicle lifting equipment. On that occasion drivers in Northern Ireland were given extensions of their certificates until the problem was resolved.

In the South motorists were asked to present and undergo part of the test and be issued with a “fail” certificate and to return at a later date to complete inspections which involve the use of lifts.

Applus+ said it has been implementing a repair and replacement programme for lifts in recent months. Last week its tests were fully operational at in Northpoint (Ballymun), Fonthill (Dublin 22), Deangrange and Naas.

Full NCT inspections are also being conducted in the following centres, although not all lifts in these centres are fully operational: Cork (Little Island), Limerick, Galway, Letterkenny, Waterford, Killarney, Ballinasloe, Athlone, Skibbereen, Ballina and Enniscorthy.

1 Coronavirus: More ‘striking’ evidence BCG vaccine might protect against Covid-19
2 Eccentric Thai king’s flying visits ensure a colourful German lockdown
3 Genetics shed light on origins of Irish strains of Covid-19
4 Donald Trump’s clown car administration has put the fear in all of us
5 Irish doctors on getting Covid-19: ‘In 90 minutes, I deteriorated quite rapidly’
Real news has value SUBSCRIBE