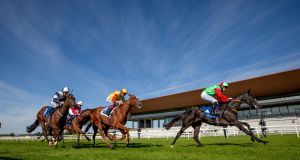 Elysium wins behind closed doors at the Curragh on Sunday. Photograph: Morgan Treacy/Inpho

Horse Racing Ireland officials believe its five-year Strategic Plan for the sport can still provide a framework for future recovery despite the coronavirus pandemic.

HRI’s strategic vision for 2020-24 was unveiled in March, just three weeks before racing stopped as part of lockdown measures introduced due to the Covid-19 emergency.

It was unfortunate timing for an ambitious programme that aimed to increase sustainable employment in the industry to 35,000 in five years and outlined plans for a second all-weather racecourse in Tipperary.

The ambition to increase annual attendances to 1.5 million in the same timeframe looks particularly extravagant now considering the sport has largely been held behind closed doors since June.

However the chief executive of racing’s ruling body HRI dismissed any suggestion of the strategic plan being all but redundant in the current political and public health environment.

“In some ways there are elements of the plan that are needed more than ever. It was founded on growth and increased focus on horse welfare and protecting rural employment. That’s still the ambition.

“There has been a hiatus in the interim but you’ve got to keep looking to the future and grow,” Brian Kavanagh said.

Asked if plans for a new all-weather at Tipperary have been effectively shelved for the foreseeable future, the HRI boss said: “Not definitely. We are in a phase where we are managing our way through a crisis. There will be another side to that crisis.

“The priorities of that plan are sound. If we follow them, and if we can follow them, they will deliver the return. This is a sector that make its contribution to the country’s economic recovery.”

Another key element to the plan was the establishment of a new equine health and welfare campus with world class diagnostic and forensic services.

When it was launched in March the plan was the first long-term strategy publicly launched by HRI in almost a decade.

The grey made a big impression on champion jockey Paul Townend - “It’s a while since I’ve had as much fun on horseback!” - when successful at Listowel a week ago.

Andalusa is already rated significantly higher over fences than she was over hurdles and can continue her upward career curve.

Mullins could also be on the mark in an earlier maiden hurdle with another mare, Killultagh Bella.