Course would normally welcome around 430,000 racegoers between October and March 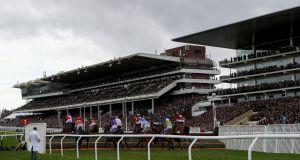 A view of the packed grandstands at Cheltenham during the running of the Weatherbys Champion Bumper during this year’s festival in March. Photograph: Dan Sheridan/Inpho

Cheltenham racecourse is expected to face a loss of at least £15 million (€16.3 million) in ticket revenue alone following Tuesday’s announcement that paying spectators are almost certain to be absent from British racecourses for the next six months.

The period to the end of March 2021 includes all but three of Cheltenham’s 16 annual race days, and all of the major fixtures during the winter campaign including the three-day Gold Cup in November, the International meeting the following month and the National Hunt Festival in mid-March.

Cheltenham would normally welcome around 430,000 racegoers to its 13 race days between October and March. While precise details of revenue from individual tracks in the Jockey Club Racecourses group are undisclosed, ticket prices at the course range from £20 to £100 according to the enclosure and meeting, and an annual badge for the 2019-20 season costs £410, an average of around £25 per day.

Taking £50 as an average price of admission, and allowing for VAT, the course stands to miss out on at least £15 million from ticket sales alone, before other customer-dependent sources of revenue such as hospitality and betting are taken into account.

It is a daunting prospect for the sport as Cheltenham prepares for its season-opening two-day meeting next month, and the prospect of an entire winter campaign played out in front of empty stands.

“At the moment the various racing authorities are trying to get as much clarity as possible,” Ian Renton, Jockey Club Racecourses’ regional director for Cheltenham and the South West, said on Tuesday, “but on the face of it, it looks likely to have a significant effect on our season.

“We can’t put a figure on exactly how much it would cost, but it would be massive because unlike many smaller courses where media rights make up a significant amount of revenue, it’s the reverse for larger courses, where attendance and hospitality make up a large part of our revenue.

“All we can do is minimise our costs over the period. Sports generally, including racing, will be seeking government intervention to ensure that courses can survive this period.

It’s not only the racecourses. The owners, trainers, jockeys and stable staff also need the prize money and when a racecourse is making a loss, it’s very difficult to invest in prize money as well. The fixed costs remain, so all we can do is manage the variable costs [such as prize money] as best we can.”

The Festival is also estimated to be worth at least £100 million to Cheltenham’s local economy, while its other main meetings would also normally attract tens of thousands of racegoers to the town, packing out its hotels, restaurants and bars.

As for Cheltenham, Renton and his team can only plan for the worst and hope for the best. “We’ve been planning for months for every eventuality,” he says. “Our team is the most efficient you can imagine, they would normally have had everything in place for the 2021 Festival before the 2020 Festival has taken place.

“Things change on a daily basis and what we were anticipating a week ago could be very different from what we will be anticipating in a week’s time.”