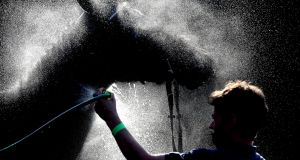 A race horse is sprayed with water to cool it down following a race at Warwick. Photograph: David Davies/Getty Images

A “readymade” digital passport system to ensure movement of horses in Europe is being lined up if the European Union and UK government can agree a Brexit deal.

The impact of coronavirus hasn’t prevented Europe’s racing authorities from collaborating with the sport horse industry and proposing a solution to the issue of free movement of animals between Britain and the EU after the end of the Brexit transition period.

That will see the end of the tripartite agreement that has allowed horses be moved freely between racing’s three major jurisdictions, Ireland, France and Britain.

An umbrella body called the International Horse Sports Confederation (IHSC) is proposing a digital passport system that will provide all EU countries with identification and ownership information of horses as well as their veterinary and vaccination records.

It would also meet the requirements of new EU ‘high health’ animal legislation which is set to become law next year.

An IHSC taskforce is made up of representatives of key racing, breeding and sport-horse sectors throughout Europe and includes Horse Racing Ireland’s chief executive, Brian Kavanagh.

“If the authorities do a deal this is a readymade technological solution to track the movement of horses. So it could tick a lot of boxes,” the HRI boss said

“But it’s in the hands of the higher negotiations and is contingent on a deal being worked out between the EU and the British authorities. It could provide some solution to the problem of movement, whatever about other issues such as tariffs and taxes.”

The new body is the first time that the thoroughbred and sport horse industries have got together under a single banner to push for the interests of a sector which it estimates generates over €50 billion a year in Europe and is responsible for almost 400,000 jobs.

Proposed new ‘high health’ laws are intended to provide adequate evidence to the EU that if systems of sanitary care, traceability and oversight in terms of animal healthcare are in place then horses can move to another country with the same type of system in place.

In the event of a Brexit deal, that may see Britain categorised as a ‘third country’ which would allow free movement of horses. A no-deal scenario however could result in horses having to move through designated border inspection points with inevitable delays as a consequence.

Separately racing in Britain suffered a setback on Tuesday when the prime minister Boris Johnson confirmed that plans for spectators to return to sporting events next month won’t go ahead due to rising Covid-19 infection rates.

It is an immediate blow to Newmarket which had been planning to welcome crowds of up to 1,000 people at each of the three days of its Cambridgeshire meeting which starts on Thursday.

On Monday a successful pilot event with 450 spectators on-track took place at Warwick but British racing’s authorities have said the industry is facing “a severe threat” now that a return of spectators appears to have been shelved for the foreseeable future.

A British Horseracing Authority statement outlined: “The delay to the public’s return to sporting events is a serious blow to the horseracing industry and to the people and communities who depend upon it for their living.

“Our sport has worked hard with public health officials to return safely and carry out pilot events. The exemplary response from the spectators in following the measures we put in place has shown that organised events can be run safely.

“We look forward to a full evaluation of the pilots and for the evidence to be used to inform future decisions about sporting events.

“Despite all those efforts, our industry is now facing a severe threat. We are the second most attended spectator sport in the country.

“Without the millions of people who normally enjoy a day at the races, many people’s jobs are at serious risk, as are the businesses they work in.”

The BHA’s chief executive Nick Rust also urged the British government to provide financial support to racing but also accept the case for urgent reform of the Levy system.

In racing news, Aidan O’Brien’s dominance of the Alan Smurfit Memorial Beresford Stakes could extend to 10 wins in a row at the Curragh this Saturday.

O’Brien’s highly-rated maiden Van Gogh is among the Ballydoyle entries for the Group Two event which the trainer has won for the last nine years and 19 times in all.